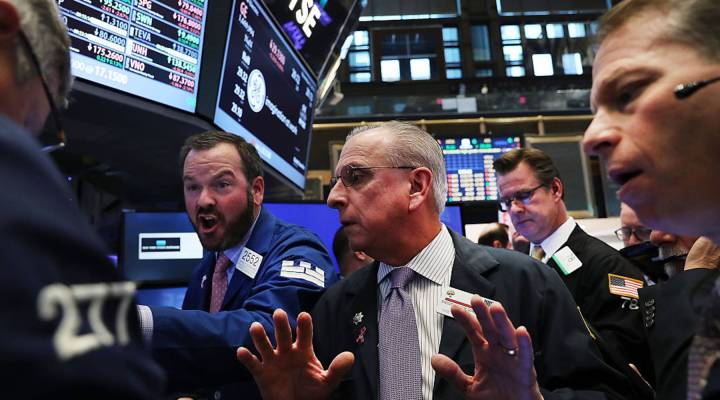 Traders work on the floor of the New York Stock Exchange (NYSE) the morning after Donald Trump won a major upset in the presidential election. Global markets originally dropped after Trump began to pull ahead of his rival Hillary Clinton. In morning trading, The Dow was down slightly. Photo by Spencer Platt/Getty Images

Traders work on the floor of the New York Stock Exchange (NYSE) the morning after Donald Trump won a major upset in the presidential election. Global markets originally dropped after Trump began to pull ahead of his rival Hillary Clinton. In morning trading, The Dow was down slightly. Photo by Spencer Platt/Getty Images

Global markets and currencies had a volatile night as results were called for the United States presidential race. The peso fell to a 20-year low, Asian stocks took a tumble and, at one point, the Dow Jones Industrial Average overnight trading fell by as much as 700 points. By the time the markets opened in the U.S. this morning, Donald Trump was officially elected president.

Here’s how it looked today at closing:

Stocks are back up after a night of uncertainty. One possible reason that these major indexes rose? Trump’s economic initiatives may mean less regulations on Wall Street.

“If you take Trump’s policies at face value, they are favorable for economic growth and inflation,” said David Lefkowitz, senior equity strategist at UBS Wealth Management in an interview with Reuters.

Investor sentiment was less optimistic in the previous months. Last month, we talked to Justin Wolfers, professor of economics at the University of Michigan, about tracking the markets reactions to the election. As with most elections, the markets do not like the uncertainty of presidential campaigns, but they tended to favor the Democratic nominee this time around. According to Wolfers, the markets were up when Hillary Clinton did well in the debates.

“We’ve looked at this for pretty much every election since 1880, and to see Wall Street cheer when a Republican becomes less likely to win — that’s extremely unusual,” Wolfers said. “Usually, Wall Street doesn’t care that much about elections. This time, they think it’s a really big deal.”

Just two weeks ago when FBI Director James Comey announced that the agency discovered new emails tied to Clinton sent on a private server, the markets slumped, sending the S&P 500 into a historic nine-day losing streak. When Comey announced over the weekend that Clinton would not face charges, the markets bounced back.

However, that wasn’t the only time the markets seemed to react to big election news. We took a look at other notable moments in the last few months of the campaigns and plotted them alongside market reactions: