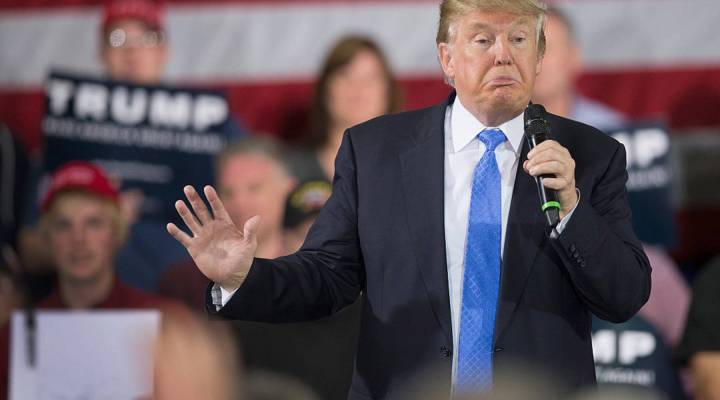 COPY
Republican presidential candidate Donald Trump speaks to guests during a campaign rally on March 29, 2016 in Janesville, Wisconsin. Wisconsin voters go to the polls for the state's primary on April 5.   Scott Olson/Getty Images

Republican front runner Donald Trump told the Washington Post he would eliminate the national debt – currently valued at $19 trillion — in eight years.  Eight years from now, that total’s projected to be as much as $26 trillion.

Many economists had strong feelings about Trump’s plan.

Glenn Kessler, who writes the Washington Post’s Factchecker column, called it “mathematically impossible. The fact of the matter is there isn’t a whole lot to cut,” he said.

Kessler said Trump isn’t accounting for the additional debt that is projected to accumulate over the next eight years. That would bring the total to $26 trillion, said Kessler, citing the Congressional Budget Office, not $19 trillion. The bulk of the federal budget pays for Medicare, Social Security and other entitlements that Trump has promised not to cut.  The rest is discretionary spending – for the military, education, highways, everything else – which over eight years only adds up to $10 trillion.

“So if Trump eliminated every government function except for paying out Social Security and Medicare bills, it wouldn’t get him very far, he’d still have $16 trillion worth of debt to eliminate,” he said.

The Trump campaign has said it would sell off government assets – land, buildings.  That totals only about$3 trillion, according to the U.S. Government Accountability Office, leaving $13 trillion left to cut.

Sales of assets may pose financial problems in the future, said Harvard’s Rogoff.  “You can sell stuff but you may have to rent it back later. You’re giving up future revenues, creating future expenses in order to paper down the immediate value of your debt and you’d have to end up raising taxes or pay for it in some way.”

Debt reduction isn’t especially controversial compared to the speed at which Trump says he can do it, said the University of Michigan’s Wolfers. Slashing discretionary spending by as much as would be necessary so quickly “would cause the U.S. economy to crash, not slow, not a recession: a depression,” he said.

A depression that would leave the world without it’s last functioning engine of economic growth – the the U.S. economy.  A sputtering economy would also reduce government tax revenue, making it even harder to reduce the debt. “The economy’s not in a position to handle thinking about bring down debt at the moment,” said Rogoff.

The Trump campaign suggested that selling oil from government lands could generate offsetting revenue.  In that case, the U.S. would have to sell as much oil per year as Saudi Arabia does … for a hundred years.