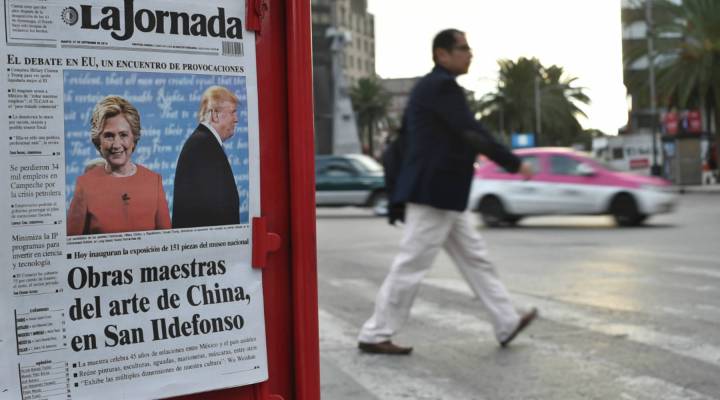 Financial markets around the world reacted to last night’s presidential debate between Donald Trump and Hillary Clinton, with some adjustments to views of the upcoming U.S. election.

In currency markets, traders are taking the view that Trump is now less likely to win. The Canadian dollar and the Mexican peso spiked up. In the case of the peso, it went up about 2 percent in morning trading, the biggest gain in seven months.

“The Mexican economy is very exposed to U.S. foreign direct investment,” said Michael Hewson, chief analyst at CMC Markets in London. “The fact that Hillary Clinton was perceived to be leading the debate has prompted a move back into the Mexican peso, because the perception is it makes it much less likely that Donald Trump, first and foremost, will become president and secondly, will implement the protectionist measures which would in all likelihood hurt the Mexican economy.”

Markets tend to view Clinton as a candidate who will more or less keep the U.S. on a predictable trajectory, while some economists have said they think that Trump could destabilize the U.S. economy.

But Marc Goldwein, senior policy director at the Committee for a Responsible Federal Budget, doesn’t expect this debate to have lasting effects on the market.

“I don’t think this debate really taught us anything new that we didn’t know from watching the campaign,” he said just after the debate on Monday night.

A bigger concern, said Goldwein, is that we have “two candidates who have essentially ruled out touching the three most important government programs — social security, defense and Medicare.  It’s going to be really hard to have a plan that has our government financing adding up over the long run, and that should be a problem both domestically and internationally.”