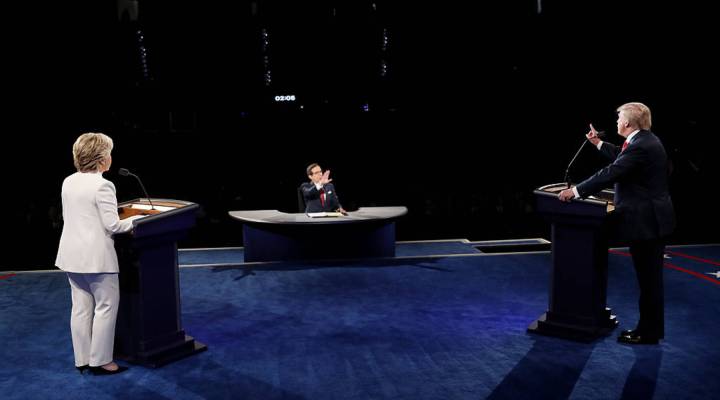 Donald Trump’s refusal to say he would concede if he loses the presidential race was the most talked-about moment from tonight’s third and final debate.

When pressed by moderator Chris Wallace on whether he would observe a “peaceful transition of power” and come “together in part for the good of the country,” Trump refused to answer.

“Are you saying that you are not prepared now to commit to that principle?” Wallace asked.

“What I am saying is that I will tell you at the time. I will keep you in suspense, okay?” Trump answered.

Initially, Trump tried to avoid the question by, once again, calling the election “rigged”.

“She shouldn’t be allowed to run,” he said about his opponent Hillary Clinton. ” It’s — she’s guilty of a very very serious crime. She should not be allowed to run. And just in that respect, I say it’s rigged because she should never have been allowed to run for the presidency based on what she did with e-mails and so many other things.”

It’s common refrain for Trump, but as we’ve said before:

Aside from that, the presidential debate focused on several tough topics, including gun control, abortion, and Russia, in relation to the email hacks. There was also some name-calling. When it came to the economy, Trump and Clinton turned to many of the issues they’ve brought up during previous debates, albeit with a bit more focus on the issues. Let’s dig in on some of the economic highlights of night:

Both candidates turned to familiar rhetoric about creating jobs, including Trump’s attack on trade as a reason why America is losing jobs.

As we’ve seen, the situation is more complicated than that. Trade agreements can both kill jobs while creating new ones. The newly created jobs are typically better-paying, though the displaced workers won’t necessarily be able to get those new jobs.

Trump compared American job growth to other countries’, saying: “Last week, as you know, the end of last week, they came out with an anemic jobs report, terrible jobs report. In fact I said, ‘Is that the last jobs report before the election because if it is, I should win easily.’ It was so bad. The report was so bad.”

NOT a terrible jobs report.
People went back into the labor force. That is a good thing.

Trump is referring to the monthly report from the U.S. Bureau of Labor Statistics. For September, the BLS reported jobs increased by 156,000 and the unemployment rate was at 5 percent. Trump has repeatedly cast doubt on the government’s economic data and his supporters don’t believe them.

To hear more about the presidential candidates’ plans for job creation, click the audio player below:

Trump tried to frame the admittance of Syrian refugees as away of contributing to terrorism.

“She’s taking in tens of thousands of Syrian refugees who probably in many cases — not probably who are definitely in many cases — ISIS-aligned,” Trump said about Clinton. “And we now have them in our country, and wait until you see. This is going to be the great Trojan horse.”

Refugees are actually screened more thoroughly than students and tourists coming into the U.S.

Coming into the U.S. as a refugee is difficult — they’re screened more than students or tourists. https://t.co/6DNXzdQeaD

In fact, the refugee program “would be among the worst ways to try to come if you were wanting to commit an act of terror,” American University Professor Sarah Deardorff Miller told us last fall. “If not just because it’s such a lengthy process, but it’s also among the most stringent of security processes.”

Then, of course, there’s The Wall.

Commissioner of the U.S. Customs and Border Protection Gil Kerlikowske told us earlier this year that the wall Trump is proposing would be impossible to build due to rough terrain — the hundreds of miles of border fences are already very expensive to maintain.

The other half to Trump’s wall proposal, of course, is that Mexico will pay for the thing. It’s not clear how much a hypothetical border wall would cost — some estimates peg it at around $25 billion. Mexican President Enrique Peña Nieto has said the country wouldn’t pay. Besides, a number of Trump’s proposed funding sources are not feasible.

Wallace pressed Clinton on her connection to the Clinton Foundation and the emails suggesting she might have used her position of Secretary of State to help the foundation’s donors. Clinton dodged the question by highlighting the nonprofit’s work and throwing a barb at Trump’s foundation.

“I’d be happy to compare what we do with the Trump Foundation, which took money from other people and bought a six foot portrait of Donald,” she said. “I mean, who does that? It just was astonishing.”

Neither candidates revealed much more specifics about their plans, but they did try to discredit their opponent’s plan.

Most of the gains in the last year since the great recession have gone to the very top. So we are going to have the wealthy pay their fair share. We are going to have corporations make a contribution greater than they are now to our country…his whole plan is to cut taxes to cut give the biggest tax breaks ever to the wealthy and the corporations. Adding twenty trillion dollars to our debt and causing the kind of dislocation that we have seen before, because it truly will be trickle-down economics on steroids. So the plan I have will actually produce greater opportunities; the plan he has will cost us jobs and possibly lead to another great recession.

Well first of all before I start on my plan, her plan is going to raise taxes and even double your taxes. Her tax plan is a disaster and she can say all she wants about college tuition and I’m a big proponent, we’re going to do a lot of things for college tuition, but the rest of the public is going to be paying for it. We will have a massive, massive tax increase under Hillary Clinton’s plan.

Wallace ran out of time to get substantive responses from the candidates on how they’d fund entitlement programs like Medicare and social security.

Instead of answering the question, Trump turned to the Affordable Care Act, or Obamacare:

It’s destroying our country, it’s destroying our businesses. Are small business and our big businesses — we have to repeal and replace Obamacare. You take a look at the kind of numbers that that will cost us in the year seventeen, it is a disaster, if we don’t repeal and replace — now it’s probably going to die of its own weight. But Obamacare has to go.

#Obamacare is not an entitlement program.

For Clinton’s part, she said raising the taxes on the wealthy will help grow social security:

What we want to do is to replenish the social security trust fund by making sure that we have sufficient resources. And that will come from either raising the cap and or finding other ways to get more money into it.  I will not cut benefits…And I’ll say something about the Affordable Care Act, which he wants to repeal: the Affordable Care Act extended the solvency of the Medicare trust fund. So if he repeals it, our Medicare problem gets worse. What we need to do is go after the long-term health care drivers. We’ve got to get cost down, increase value, emphasize wellness. I have a plan for doing that. And I think that we will be able to get entitlement spending under control with more resources and smarter decisions.

This debate leave you anxious? Not? Take the @Marketplace economic anxiety quiz. https://t.co/Gj3pbGy6ek

To hear more about the presidential candidates’ plans on entitlement programs, along with their proposals to reduce the national debt, click the audio player below: