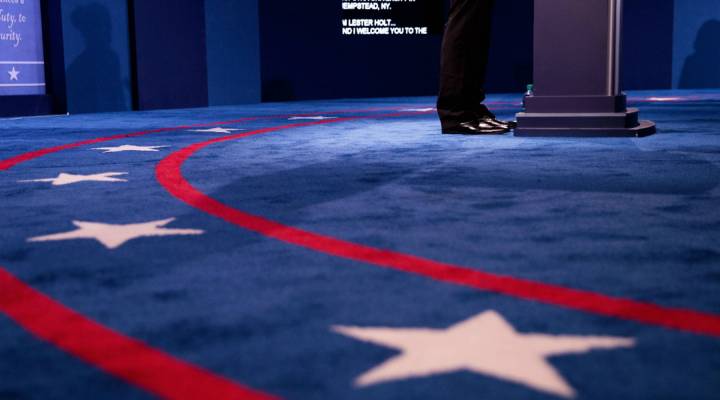 COPY
Students acting as stand-ins for the presidential candidates take part in a rehearsal for the first 2016 U.S. presidential debate. Drew Angerer/Getty Images

Hillary Clinton and Donald Trump square off in the first presidential debate Monday, and predictions are that over 100 million viewers will tune in. That would rank the event among the most-watched programs in TV history, and the broadcast and cable networks airing the debate hope to cash in.

The debate itself is ad-free, but broadcasters and cable networks will still cash in. Thirty-second spots before and after the debate are going for $200,000 to $250,000 on the national networks.

Brian Steinberg covers television for Variety and said those prices are in line with some of TV’s most popular shows.

As high as these prices may sound, they don’t come close to the Super Bowl, which pulled in $5 million a spot this year. David Campanelli at Horizon Media said there’s one crucial difference between the two events.

“This isn’t an event that’s just happening on one network,” he said.

“It’s going to be across five or six networks which gives advertisers who do want to participate a lot of places to go.”

Networks are leveraging the debate’s popularity by getting companies who want prime debate slots to buy less popular ad time as well. And if Trump and Clinton make great theater tonight, who knows what advertisers will be willing to cough up for the next round.