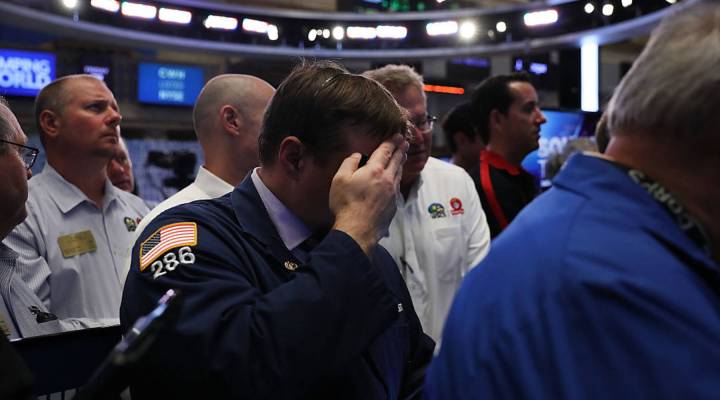 COPY
Almost 80% of people in the Marketplace-Edison Research economic poll stated that they are "afraid" of what might happen to their financial situation following this presidential election, Spencer Platt/Getty Images
Economic Anxiety Index®

Almost 80% of people in the Marketplace-Edison Research economic poll stated that they are "afraid" of what might happen to their financial situation following this presidential election, Spencer Platt/Getty Images
Listen Now

More than half of the people in our latest Marketplace-Edison Research economic poll said they think the presidential election will affect their personal financial situation. Over 70 percent of them used the word “afraid” to describe the event.

Ralph Baldi, a Donald Trump supporter,  is petrified that Hillary Clinton will win.

“Because she’s talking about taxes on taxes on taxes,” he said. “And where is that going to leave me?  It’s going to be standing on the street corner trying to sell pencils.”

Baldi is 62 years old and from Memphis, Tennessee.  He’s also afraid of cuts in his disability payments.

“I would be afraid that if Trump won, I would lose my health insurance,” he said. “He has threatened to immediately dismantle the Affordable Care Act.”

Robert Walker owns a small software business in Seattle.  He’s an independent, afraid of both Clinton and Trump. With Trump?

“He’s said that he wants to put a 25 percent tariff on goods coming in from China,” Walker said. “China is our No. 1 state trading partner in Washington.”

Walker’s fear with Clinton? Immigration. More specifically, getting enough skilled IT workers in the U.S.

“There are no specifics in Clinton’s proposals around what comprehensive immigration reform actually means,”  he said.

In fact, when I talked to Walker he was interviewing software developers in Bulgaria.

Everybody I talked to traces their economic fears back to what Walker said: there are so few specifics in this campaign.

So how can you blame them for being afraid?  That’s what Jim O’Sullivan said.  He’s chief U.S. economist at High Frequency Economics.  He said the candidates are fanning the flames of fear, with negative talk about the economy.

“From the Trump side it’s a pretty clear story that the economy is a disaster,” he said. “Now, from the Clinton perspective she’s saying we’ve come a long way but also she, I think, talks about inequality a lot.”

O’Sullivan said the candidates figure all the negative talk gives people a reason to vote for them, so they can fix all of the economic problems they’ve campaigned on.

He said they think fear about the economy is a good motivator at the polls.