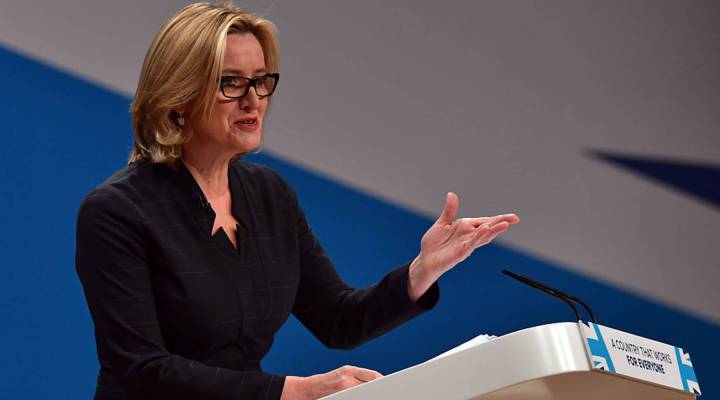 COPY
Home Secretary Amber Rudd delivers a her first speech as Home Secretary on the third day of the Conservative Party Conference 2016 at the International Conference Centre in Birmingham, England.     Carl Court/Getty Images

Britain’s departure from the European Union — or Brexit — is turning into a bumpy ride. And it’s hardly begun.

Formal talks between the U.K. and its European partners about the terms of the withdrawal are unlikely to start until next year and should last at least two years. But already a furious row has erupted between the British government and some of the country’s business leaders over one of the key issues arising from Brexit: the issue of immigration.

Amber Rudd — the Home Secretary (or Interior Minister) — says that the vote for Brexit in a national referendum during the summer was partly a vote against mass immigration  and the EU’s principle of the free movement of people.  EU citizens have the right to live and work anywhere throughout the 28-nation bloc and more than 3 million have exercised that right and settled in Britain.

Rudd wants to reduce the influx into Britain both from the EU and the rest of the world. At the Conservative Party’s annual conference last week, the minister attacked British business for offering too many jobs to international candidates, saying tougher curbs on hiring foreigners are needed to ensure they are not taking jobs from Britons. Rudd pledged to tighten restrictions on companies recruiting from abroad and promised to bring annual net migration into the U.K.  down from the current “unsustainable”  figure of a third of a million a year to the tens of thousands.

Some business leaders reacted angrily to Rudd’s pledge and the language in which it was couched.

“This country would not be where it is today — one of the 5 largest economies in the world — without the contribution of migrants over the decades,” he said.

The peer is the perfect advertisement for the economic and social benefits of immigration. Bilimoria came to the U.K. from India as a student in the 1980’s; set up the brewery which now supplies 98% of the UK’s Indian restaurants; was appointed head of Birmingham University; and awarded a seat in the House of Lords. He denies that immigrants have been taking jobs from British people.

“This country has one of the lowest unemployment rates in its history , around five percent,” he said. “That’s in spite of well over 3 million people from the European Union working here in the U.K . 250,000 of them working in the construction industry. A third of all doctors here are foreign.  What would we do without them?”

Another business leader expressing skepticism over the proposed crackdown on immigration is Will Butler–Adams of Brompton Bicycles.  His company makes folding bikes for commuters and sells them around the world. “We export 80% of our output to 44 countries and we need to employ foreigners to help us do that,” he told Marketplace.

“We have staff from China, from France, from the Netherlands, from Italy. They help us trade abroad. If Brexit means that we don’t allow these switched-on, clever people to come to the U.K. and help us trade…that will be bad,” Butler-Adams said.

In response to an outcry from business the government has now softened its rhetoric on immigration. Last weekend it rowed back on a plan to name and shame companies that employ a preponderance of foreign workers. But the government insists it will press ahead and cut migrant numbers substantially because, in last year’s general election and this year’s EU referendum , that is “what a majority of Brits have voted for.”