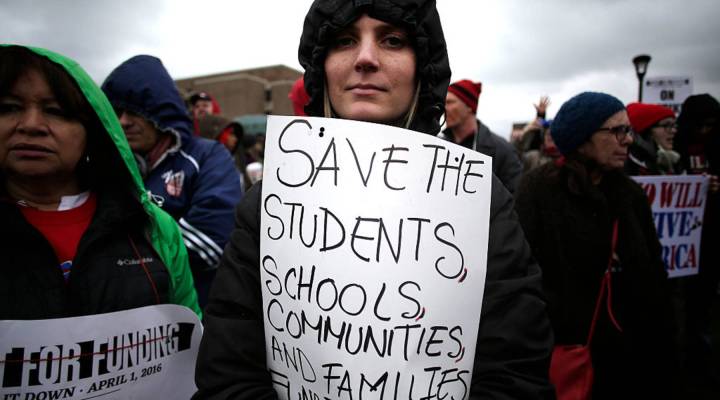 A strike has been averted: Public schools in Chicago are open today. The city and the teacher’s union agreed to a four-year contract proposal that will guide pensions, class sizes and layoffs. The union said the deal is good for kids, teachers and the community, while Chicago Mayor Rahm Emanuel said it will help shore up school finances.

Heavy borrowing, growing pension obligations and a fiscal crisis in the state have put the district’s finances in an increasingly precarious position, she said. In less than 20 years, the schools’ outstanding debt has more than tripled to nearly $7 billion.

“In order to get out of this situation, they’re going to need to either reduce expenditures or increase revenues,” Cortez said.

There isn’t much left to trim, said Dick Simpson, a political science professor at the University of Illinois, Chicago, and a former alderman.

In 2013, the city closed 50 schools. It’s cut after-school programming and counseling, and laid off dozens of art and music teachers and librarians.

“Most of those so-called ‘extras’ are already gone, and it’s not likely they’re going to be able to cut their way enough to be able to meet the current crisis,” Simpson said.

The district is asking teachers to pay more toward their pensions. To raise revenue, Simpson said, the city could divert tax funds earmarked for economic development to public schools or seek more funding from the already cash-strapped state.