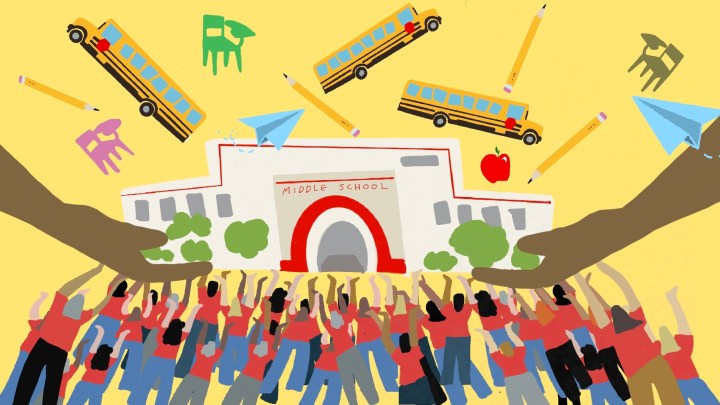 Education support specialists on average make $35,000 a year, but they often go the extra mile to help students succeed. Illustration by Julia Schiff

Education support specialists on average make $35,000 a year, but they often go the extra mile to help students succeed. Illustration by Julia Schiff

The challenges of teaching and being a teacher throughout the pandemic have been well documented. But often lumped in with teachers are education support professionals who help keep schools running. Compared to teachers, ESPs are paid significantly less, and pay has not kept up with inflation or rising costs of living.

The average annual pay for an ESP is $35,000. But according to the National Education Association, ESPs are making less than they were 10 years ago, when adjusted for inflation.

Also called classified employees in some states, ESPs are the paraeducators, food service specialists, custodians, bus drivers and support staff that keep schools afloat. Rae Nwosu, president of the National Council of Education Support Professionals, refers to them as the mortar of the school, the glue between the bricks that keeps everything together.

To make ends meet, many ESPs work multiple jobs. According to the NEA, 37% of ESPs work a second job, which was true for Debra Ward-Mitchell, who is the NEA’s ESP of the year and also president of her local ESP union outside of Chicago.

“At one point I worked three jobs,” she said, and she sees this frequently within her union. “We all do extra jobs to make ends meet,” she said.

The benefits aren’t much solace either. Nwosu said that she couldn’t afford the health insurance provided by her school district, so for some time she and her two sons went without health insurance.

Nwosu said she’s seen this with other ESPs at her school as well — it’s driving them away and fueling a worker shortage, because they just can’t afford to work as an ESP. One bookkeeper at Nwosu’s school left to work at a local grocery store because the pay and benefits were better there.

And the pandemic is only exacerbating the issue. According to a survey from the NEA, more than 55% of members have said they are more likely to leave or retire early because of the pandemic. The survey also found that 67% of respondents felt that burnout is a “very serious” issue, and 81% of respondents said that raising pay would be an effective way to address the burnout.

“I had to work 38 years to get to $40,000 a year,” said Ward-Mitchell, who in addition to her union duties works as the assistant director of an infant care center that provides free day care for teen parents at the district’s public schools. And, according to her, this is the better end of the pay spectrum. “In our school district that we work in, we’re paid at a higher rate than most education support professionals,” Ward-Mitchell said.

What’s more, Ward-Mitchell and Nwosu frequently go into their own pockets to support students. “I can’t even say how much I’ve spent,” Nwosu said. “I see a need, I’m gonna take care of that need.” She’s bought clothes and shoes for countless students, and paid for lunches and school supplies throughout the years. Ward-Mitchell said she’s spent thousands of dollars throughout her career on new shoes, clothes and even hotel rooms for students fleeing abusive situations.

The pandemic has only intensified the issues faced by ESPs. “COVID was very challenging for ESPs,” Nwosu said. “It put us in the forefront.”

At her school, ESPs made lunches and dinners for families, they handed out learning packets and computers for the students. Bus drivers parked their buses with Wi-Fi hotspots so students could access the internet to do their work. “I don’t think people realize the stress that was put on ESPs,” she said.

When it comes to pay progress, ESPs rely on organizing to get better pay and working conditions, but any progress is often on a community by community basis. Nwosu’s union is wall to wall, meaning it combines teachers and classified employees. Much of their advocacy work is combined. But in Texas, public employees don’t have the right to strike, which makes negotiating trickier.

“You have to strategize to organize,” Nwosu said. “We work to get friendly school board members elected.” She described mobilizing police officers, firemen and other public employees to push for higher wages. “They would come to the school board and speak up on our behalf,” she said.

Nwosu said if they could strike, they would have already. They do have the Association of Texas Educators, which advocates for better working conditions and monitors legislative progress for educators on a statewide level.

In Illinois, where Ward-Mitchell lives, they have the RESPECT campaign. Run by the Illinois Education Association, the ESP advocacy group pushes for wage increases, pensions and stronger job protections at the state legislature. Illinois ESPs have a right to strike, and ESPs strike separately from teachers if they choose. Ward-Mitchell said it hasn’t come to that for her district. It did for others, like Palatine School District 15, which held a 10-day strike in 2018. During that strike, the Illinois state government suspended their health insurance, according to the NEA.

In Minnesota, ESPs and teachers held a three-week strike in March. Though they are separate unions, striking together bolstered their bargaining power. ESPs earned a raise in starting salary from $24,000 annually to $35,000.

As the ESP shortage worsens and demand for higher pay increases, some schools are opting to contract services for cheaper. But this can take away the value of having experienced and active community members in schools.

One reason they’re able to connect so well: They live in the community.

“What a lot of people don’t know with ESPs is that we generally work in the community in which we live,” Nwosu said. ”There’s a greater trust there,” she said. This is a national trend — 71% of ESPs live in the community they work in. Take Nwosu, who works at the same middle school that both her grandmother and two sons attended.

But without pay increases, many ESPs won’t be able to live in their communities, or will have to find other jobs to support their families.