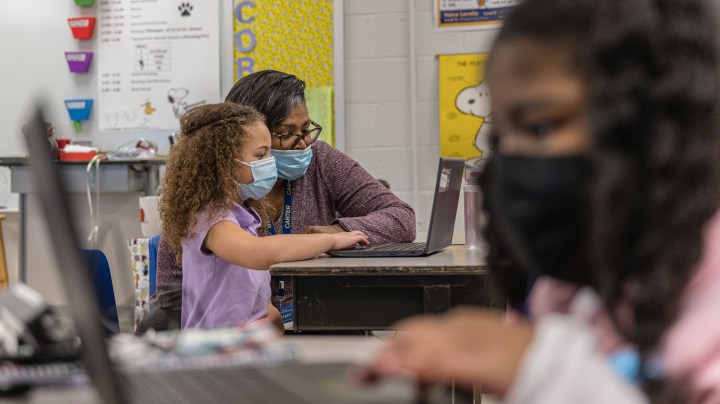 COPY
Many educators are feeling squeezed by inflation, which is upping the cost of classroom supplies and other expenses. Jon Cherry/Getty Images

Many educators are feeling squeezed by inflation, which is upping the cost of classroom supplies and other expenses. Jon Cherry/Getty Images
Listen Now

Earlier on Wednesday, President Joe Biden honored teachers from around the country in a ceremony at the White House. It’s been a challenging few years for teachers — because of the pandemic, yes — but also because a teacher’s salary just doesn’t go as far as it used to.

A report out this week from the National Education Association, the country’s largest labor union, says the amount of money teachers are bringing home is definitely not keeping up with inflation. Plus, being an educator comes with all sorts of costs.

As an instructional assistant for math classes at Susquehannock High School in Glen Rock, Pennsylvania, Terri Hebel makes just under $15 an hour.

“It’s a little hard to stomach sometimes when basically what we have are students that are making more money at their job than we’re getting,” she said.

Hebel said some high school students work at a local convenience store that pays $19 an hour. She’s been full time in her job for six years and uses her own money to stock the classroom with pretzels and Rice Krispies Treats so that kids can focus on their geometry problems.

The cost of those snacks has gone up significantly over the course of the past year and Hebel’s hourly wage has not caught up. It’s set by a union contract that’s negotiated every few years.

“We have, as a profession, still not kept pace with other professionals,” said Becky Pringle, president of the National Education Association, a labor union with 3 million members, including Terri Hebel.

The fact that teachers’ salaries are less than other Americans’ with comparable education and experience means they are often priced out of the communities where they work, Pringle said.

“We’re finding that to be more and more of the case, where educators can’t live where they teach, because the housing costs are so high,” she said.

While the cost of living has risen, some teachers haven’t felt the full effect of inflation combined with their educational debt. They haven’t had to their pay student loans, which are paused until Aug. 31.

“You could have a student loan payment that was $400 a month and you don’t have to pay it right now. So it may feel to many teachers like they might be flush with cash, but this is also temporary,” said Marguerite Roza, who directs the Edunomics Lab at Georgetown.

A lot of the educators with loans are likely to be young teachers, she added, who are also the most likely to quit.