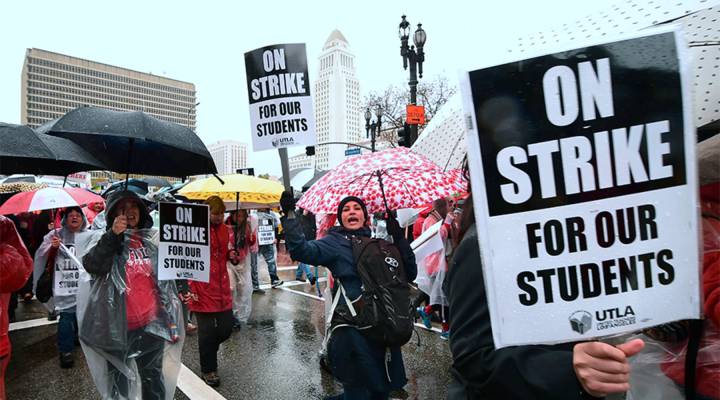 COPY
Thousands of teachers march in the rain through Los Angeles on Monday, on the first day of the first teachers strike in 30 years targeting the Los Angeles Unified School District. Frederic J. Brown/AFP/Getty Images

Thousands of teachers march in the rain through Los Angeles on Monday, on the first day of the first teachers strike in 30 years targeting the Los Angeles Unified School District. Frederic J. Brown/AFP/Getty Images
Listen Now

More than 30,000 teachers and other school staff are on strike in Los Angeles, the nation’s second-largest school district, leaving school administrators and substitutes to manage hundreds of thousands of students in the district. But while district officials and union leaders are in a standoff with each other over money, the party with the most say over funding is not at the table.

Teachers of the LAUSD, the second-largest public school district in the U.S., are striking for smaller class size, better school funding and higher teacher pay.

How the pie is carved

If the school district’s $7 billion budget is a pie, then the negotiation is about how to carve it up.

Picketing outside Belmont High School, history teacher Justin Daza-Ritchie said he teaches an Advanced Placement government class with more than 40 students in it.

“We’re supposed to have a smaller group where we can actually have college-like discussions,” Daza-Ritchie said. “When you have 45, you don’t have a class, you have a warehouse.”

Salaries and benefits for teachers, staff and administrators are by far the largest slice of pie.

“California does fairly well in terms of average salary per teacher,” said Patrick Murphy at the nonpartisan Public Policy Institute of California. “That’s in absolute terms, so it does not take into consideration the cost of living.”

Factor in that cost, and particularly the state’s housing affordability crisis, and the calculus changes.

“I’m not really here about a raise,” Belmont High School teacher Melissa Mackey said, as she picketed. “However, living in Los Angeles is extremely expensive.”

But with teacher salaries already taking up a large piece of the pie, Jonathan Kaplan, an education analyst at the left-leaning California Budget & Policy Center, said it’s hard to have room to both raise salaries and lower classroom sizes.

Unless the pie gets larger.

On the size of pies

Since the Great Recession, the school district has stored $1.8 billion in a reserve fund. That’s well-above the state requirement. The union argues that the school district should release the extra funds to grow the size of the pie enough that it can pay the new teachers and staff. The district, though, already expects deficits each of the next four years and says the funds are off the table.

But, with the exception of that reserve and some other fees, the district has little control over the size of the pie. Unlike most other places in the U.S., local California governments are not the largest funders of schools. Rather, most education funds come from the state.

Murphy said the initiative’s backers meant Prop. 98 to serve as a floor. Instead “the practice has been that’s the level schools get funded at,” he said.

Bites from the pie

In the past few years, lawmakers and voters have approved $30 billion in new K-12 funding, including through new taxes on the wealthy — expanding the state education pie by 40 percent. But despite that increase, California still ranks near the bottom of states in spending per student.

In addition, the state has begun requiring schools and teachers to pay more into pensions in an effort to quell rising debt for teacher benefits. Murphy said about 9 cents of every dollar flowing into school districts gets spent on pension debt service, but that could rise to nearly 20 cents per dollar in future years.

That means the pie has some bites taken out of it before the district or teachers can apply it to classrooms.

“Any increase they get into their salary and their contribution goes up a little bit, they don’t see a whole lot in their paycheck either,” Murphy said. “So it has this sort of cascading effect.”

New California Gov. Gavin Newsom proposed that the state pay down $3 billion in that debt, which would functionally increase the size of the pie.

Education researchers have estimated far more would be required to keep up with rising costs, such as housing and pension debts, and fund schools to a level that meets state goals. While LAUSD and the teachers union battle over how to spend what they have, one study suggests the state would have to kick in more than $25 billion for California students to receive an education in line with state goals.