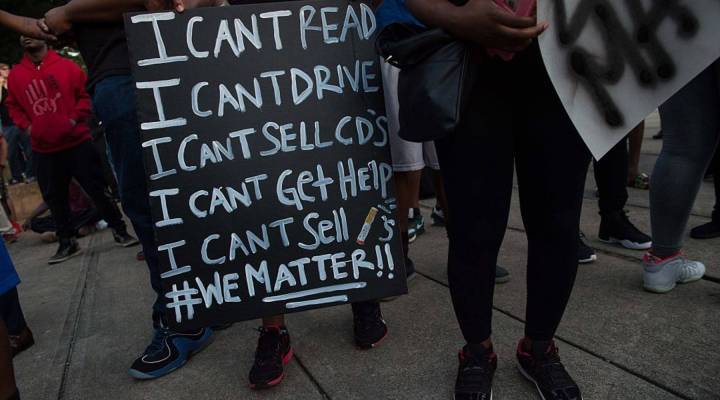 Charlotte, N.C. is recovering from a second night of protests over the police shooting of 43-year-old Keith Scott, an African-American man  on Tuesday. Tear gas was used, businesses were damaged and Governor Pat McCrory has issued a state of emergency.

During Wednesday night’s protests, Aria Tuscan Grill evacuated all 40 of its guests.

“Because our ventilation started pumping the tear gas into the restaurant,” said Andrew Shook,  the restaurant’s assistant general manager.

On Thursday, the store was open. Meanwhile, its neighbors like Wells Fargo and Bank of America told their employees to stay home.

“From the very beginning, Charlotte has been a trading city. The Nations Path, which was a major Native American trade route, ran through here,” he said.

From afar, the city is an economic powerhouse, said Amy Hawn Nelson, a director of social research with UNC Charlotte Urban Institute.

But look at a map of Charlotte, and there’s a large pie wedge that “is predominantly white and affluent with very high incomes,” Nelson said. “And then some would describe what you see as  the rest of the demographics as a crescent of poverty.”

African-Americans have an unemployment rate that’s double that for white people. Meanwhile, about a quarter of black households live in poverty, compared to less than 10 percent of white households.

“Too many people in my city are living hard,” said Joel Ford, a Democratic senator from Charlotte.

Black people make up about 35 percent of Mecklenburg county’s general population, but 78 percent of homeless people.

“It’s harder to climb out of poverty here than in any other U.S. metro area,” Ford said. “The odds of moving up in Charlotte are just 4.4 percent.”

Thirty-five-year-old Justin Perry said that’s one of the reasons why he joined Wednesday night’s protests.

“It was not just simply about Keith Lamont Scott,” he explained. “This is about a lot of other stories we don’t even know.”

They’re stories, he said, of economic frustration — of feeling beaten down in a city that’s thriving.