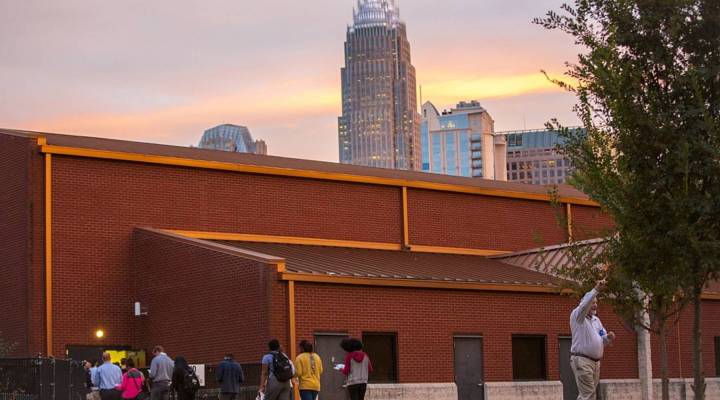 Eastway Drive winds through Charlotte, N.C. for miles. At one end, the road is dotted with modest apartments, laundromats, and small retail complexes.

The eastern part of the city is mixed-income, but with pockets of deep poverty, explained Brenda Tindal, a historian with the Levine Museum of the New South. The Grier Heights neighborhood, for example, has a median income of less than $17,000.

But just a few blocks away, you enter SouthPark, and the scene shifts dramatically.

Tindal pointed to what she called “beautiful, beautiful homes,” many adorned with large columns, porches and green lawns.

“Many of the streets are named after Ivy League colleges and universities,” she said, pointing to them.

“Segregation is very much a part of how our city is laid out. Literally just a block away was Section 8 housing,” Tindal said.

Brenda Tindal, a Charlotte historian, gives a tour of the city.

Yet the people who live in public housing will likely never make it to SouthPark. In Charlotte, the chances of a child born into poverty one day moving into a 3,000 square foot home on Princeton Avenue are near impossible.

“For low-income kids, Charlotte is one of the worst places to grow up in the United States,” said Nathaniel Hendren, who teaches economics at Harvard University and is part of a team of researchers that’s done extensive work on mobility in America.

Hendren said a child raised in poverty in Charlotte has just a four percent chance of rising to the top.

“But if instead you had grown up in, say, Sacramento or Minneapolis or other areas, we see rates of upward mobility that are more than twice as high of that,” Hendren said.

His findings have surprised a lot of people here.

It’s easy to see Charlotte as a land of opportunity. It’s the biggest city in North Carolina and a magnet for young professionals. Behind New York, it’s the second largest banking center.

But change your vantage point, and “Charlotte is looked at as a cautionary tale,” said Justin Perry, a father and community activist. He said in the 1970s, Charlotte appeared to be headed in a promising direction.

For years, Charlotte was known as the city that made desegregation work. Research shows that integrating the city’s schools helped narrow the achievement gap between African-Americans and white students.

But in the early 2000s, a court order ended busing and students returned to neighborhood schools. Today, a quarter of Charlotte’s schools have state exam pass rates that are below 50 percent. Nearly all of those schools are predominantly African-American and Latino.

“I feel like we compromised ourselves and lost our way, but the beauty of it is that no mistake is ever permanent,” Perry said.

Perry is part of OneMeck, a grassroots group that advocates for more diverse neighborhoods and schools. The city’s also launched a 20-person Opportunity Task Force to address broader inequities.

Then, there are private efforts. This year, the Goodwill Industries of the Southern Piedmont created a $22 million campus to train adults and help place them into jobs.

On a Monday afternoon, about 15 students sat in Philip Gaber’s class to learn how to dress for a job interview and use Microsoft Excel.

“This class is all about self-assessment,” Gaber said to his students. “You might take some tests and think ‘Wow, I did better than I thought I was going to do.'”

48-year-old Kimberly Carr, who sat at the very front, described what interviews are like for her.

“You have to basically sell yourself, and you may have to go beyond what you really are. I’m a really shy person, so, like, coming to this class, I have to talk,” she said in front of her classmates.

Carr was raised by a single mom on the outskirts of the city. Since high school, she’s worked a series of low-wage jobs as a nursing assistant and customer service representative. But a couple of years ago, things started unraveling. First, her computer – which she used for work – gave out. Then, her 27-year-old Buick Regal died. It didn’t take long before she was in a homeless shelter.

“You’re laying in a bunk in a room full of 300 other people, and you’re trying to sleep so you can figure out what to do the next day. That’s the lowest moment,” she said.

Carr’s back on her feet now, and she’s here at the Goodwill campus to train for her next move.

“You know, I wouldn’t mind being a medical unit secretary,” she said.

Medical secretaries start out making about $14 an hour – but they get benefits and a chance to move up.