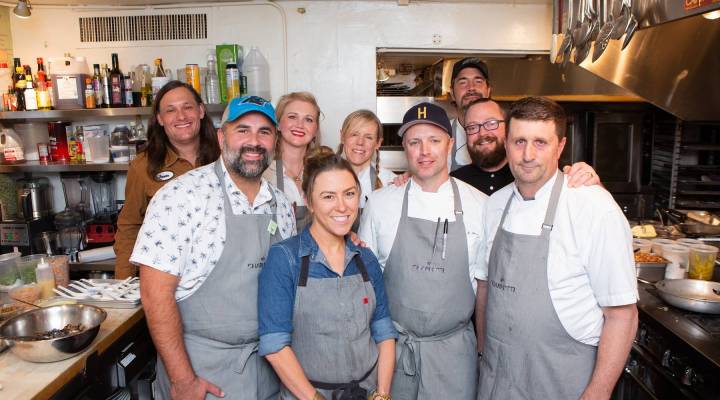 COPY
A group of chefs from Charlotte, NC, cooked at the James Beard House in New York as part of a rebranding campaign for the city. Clay Williams, courtesy of the James Beard Foundation

A group of chefs from Charlotte, NC, cooked at the James Beard House in New York as part of a rebranding campaign for the city. Clay Williams, courtesy of the James Beard Foundation
Listen Now

At a restaurant in Charlotte, North Carolina, recently, some of the city’s best chefs showed off for locals at an event sponsored by the local tourism authority. Waiting for her first course, Lisa Eversole said the dinner highlighted a big change in the city.

“Oh my God, food has gotten so much better,” she said.

“We used to go to Charleston all the time for good food,” her husband Jim added. “There was nothing downtown, nothing. Now, it’s everywhere.”

“I didn’t go out and hunt the deer, I’m not that hardcore,” he explained later in the evening.

The dinner was a practice run for an event at New York’s James Beard House to promote Charlotte’s restaurants. It’s part of the city’s rebranding strategy, to make a name for its culinary scene. The so-called “Queen City” is home to Bank of America and other large financial firms. In the past few decades, banking has driven construction and an influx of new residents, including for the first time, really, immigrants. The town has gradually become a lot more hip and diverse. And now, it’s officially rebranding, with food front and center.

“There’s so many other southeastern cities that are known for being food destinations, and we really feel like we can compete and bring something to that conversation, as well,” said Laura White, with the Charlotte Regional Visitors Authority. She says eating out is the most popular activity for visitors. But the city is also hoping to attract transplants. To do that, it needs an exciting sense of place, says Ryan Short, who runs a marketing company called CivicBrand, in Texas.

“They can’t compete just on the fact that there is the job, they have to compete on a number of things. And great restaurants, and great food — it isn’t just the chain place that they can get anywhere, it’s something that’s unique, that’s a huge thing,” Short said.

Charlotte’s efforts to promote food seem to focus on high-end dining so far. And while the overall rebranding mission includes a focus on diversity, the chefs invited to cook at the James Beard dinner were all white.

“I can’t argue with the choices. I think it’s a great squad,” said Greg Collier, who owns a Charlotte restaurant called The Yolk and runs Soul Food Sessions, a dinner series with chefs of color. “But I do think that Charlotte, as a whole, needs to make diversity a more important piece of the message, versus it being a footnote.”

The city is listening, he adds.

“Why Charlotte is so dope is because it’s not being Old South,” Collier said. “It’s not saying, ‘Just sit down, your time will come.'”

He believes other stories, like his, will soon be told.

This story was first heard in the podcast “Gravy,” from the Southern Foodways Alliance. Hear more at SouthernFoodways.org. 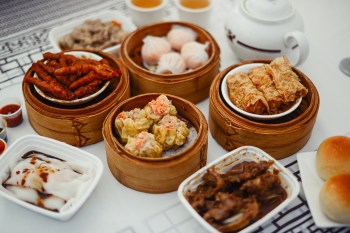