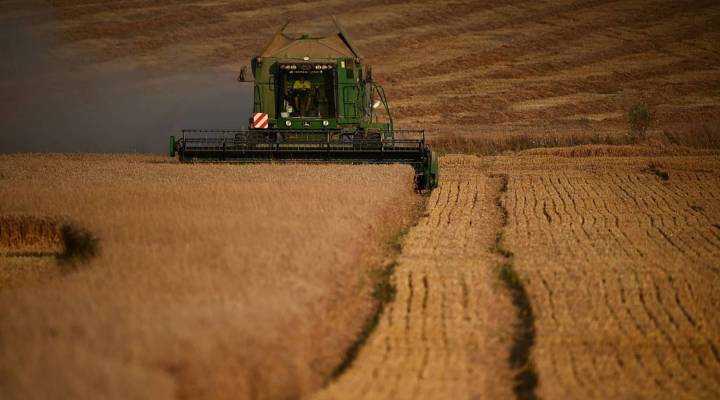 COPY
A farmer drives a combine harvester during a wheat harvest in Monthodon near Tours, central France.   GUILLAUME SOUVANT/AFP/Getty Images

Driving down a country lane through what the poet Péguy, writing about this part of France, described as “oceans of wheat”, the farmer and local farmers’ union leader Hervé Coupeau points right and left.

“From here, everything you can see belongs to the Chinese,” he said.

French farms are very often farmed by the same families for generations. But in the Berry, the heart of French cereal farming in the center of the country, Chinese buyers have been purchasing farmland in order to assure food supplies for their growing population.

Coupeau doesn’t like it. We get out of the car and go and look at a deserted farmhouse that stands in 2,000 acres of wheat and rapeseed.

The farmer has gone, he tells me, replaced by casual labor.

“[The new owners] hire people for a month or two. The rest of the year there’s no one. It’s empty! With normal owners, as it were, you’d have a family with children in the local school, a farmer’s wife who’d stay on the farm or go out to work — whichever way there’d be life. Here, in this wide open space, there’s nobody,” Coupeau said.

A company called Hongyang purchased this and several other farms, acquiring 5200 acres so far. When there’s livestock, it sells that to concentrate on the crops. Wheat, barley and rapeseed mainly.

Coupeau says they paid over twice the market price. Locals say that after each purchase, a group of Chinese investors come to see what they have bought. Then they eat at a local restaurant and return to China. The apparent unwillingness of the buyers to explain who they are and what they are about has upped anxiety.

Farmers Hervé Coupeau (in red) and Arnaud Morin (in black) in front of the first wheat farm sold to Chinese buyers at Vendoeuvres, central France.

On a farm that belongs to his parents (his farm is just next door), I met Arnaud Morin as he feeds his eighty black-faced Suffolk sheep. He also raises cattle and grows wheat. The Chinese have bought a farm that also borders on his.

Like Coupeau, Morin’s family has been cultivating this land for generations. Although Morin does not own the land he farms outright.

“I lease 95 percent of the land I farm,” he said. “If one of the owners decided to sell, I wouldn’t be able to afford to buy because the Chinese have pushed prices up so high. It’s the same for young farmers starting out. They can no longer afford to buy land. And I don’t like our land going to foreigners. The land is like our soul.”

China is investing heavily in Europe — $23 billion last year compared with $15 billion of Chinese investments in the U.S., according to U.S. business attorneys Baker & MacKenzie.

And this not the first time China has displayed interest in French agriculture.

“The Chinese have bought a lot of vineyards in the Bordeaux area, and, in the dairy sector, they bought a 20 percent stake in a big dairy cooperative in Normandy, which means, indirectly, they part-own the land,” said Antoine Brunet, a retired economic adviser to HSBC bank and author of “China’s strategy to rule the world”.

“The Chinese know that, in the future, they will need to source a lot of food abroad, so they have started to do here what they have already done in other places – in Madagascar and Argentina for example. In Africa and Latin America they have even brought in their own farm labourers to work the land they’ve bought,” Brunet said.

Back in the Berry, I visit a second, then a third farm sold to the Chinese. Lots of shiny machinery. Not a soul. At the last one, there are still curtains on the farmhouse windows, but the only inhabitant I meet is a very small kitten.

“In any case,” union leader Coupeau said, “the farmers who have sold to the Chinese don’t agree to talk. They’re a little bit ashamed.”

Local attorneys here have told Coupeau that the Chinese plan to ultimately buy 50,000 acres. If they do that, he says, they’ll be able to fill a freight train with a harvest and ship it to China.