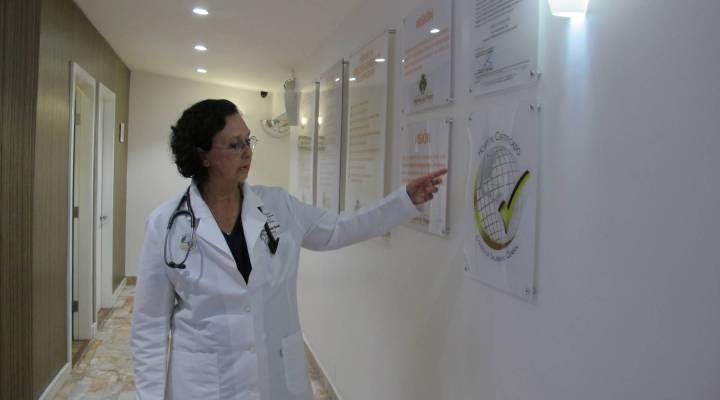 COPY
Dr. Patricia Aubanel Riedel was one of Mother Teresa's doctors during the last years of her life and now works at hospital that bears her name.  Kimberly Adams/Marketplace

Dr. Patricia Aubanel Riedel was one of Mother Teresa's doctors during the last years of her life and now works at hospital that bears her name.  Kimberly Adams/Marketplace
Listen Now

Over the weekend, Pope Francis canonized Mother Teresa. Although she was known for her tenderness with children and the poor, to some … she was a bit of a handful. Along with the many nuns and other staff supporting her, she had a team of doctors struggling to keep up with her, especially as she got older.

One of those doctors was Patricia Aubanel Riedal of the “Mother Teresa” Hospital del Prado in Tijuana, Mexico, who called working with the Catholic nun a “gift” and a “privilege”, even if it was a struggle at times. Here are some of her memories of the newest saint as she recalls them:

Mother Teresa was treated in this hospital which now bears her name.

She was 80 years old, that’s when I met her — she came into Tijuana in the late 80s to build up the first missionary house and she now has six houses in Tijuana. So one of the times she came in, she became very very ill in Tijuana. She had pneumonia, she had a heart condition and she was becoming more ill. She had a few doctors from U.S. seeing her and a couple from Mexico, but she was not getting better. And that’s when I received a call to come in to see Mother.

She didn’t listen to the radio, she never watched TV, never saw a newspaper and she knew everything what’s going on in the world. She would see that there was a war in Beirut and she would have a dream that there was a children’s hospital that was bombarded. And she woke up with the feeling that I must go to Beirut. I must go and rescue as many kids as I can. And we said, “Mother, what are you talking about? There’s no way to get into Beirut.  It’s the middle of the war, the borders are closed, you cannot get in.  What can we do to get in?” She then would take a boat from Athens, convince some fishermen to take her to the border of Beirut, and as soon as we arrived into the borders of Beirut there was a cease of fire. So we entered into Beirut and rescued the children in this hospital. It’s absolutely amazing, incidents like this — I could tell you so many beautiful stories.

Click the audio player above to hear Dr. Riedal  talk about Mother Teresa.