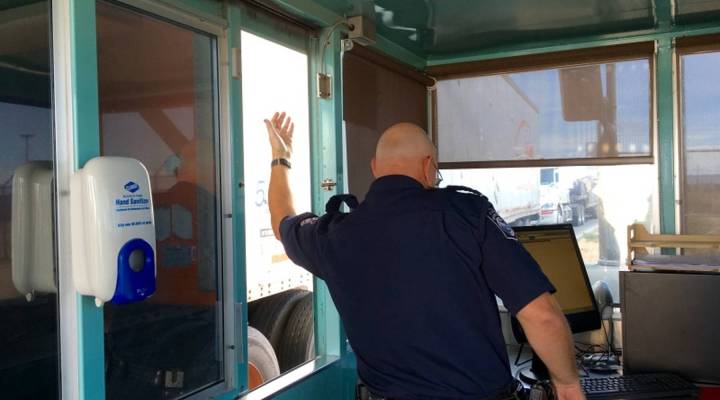 COPY
A U.S. customs officer waves a cargo truck through the port of entry in Santa Teresa, New Mexico. Dell is financing extended hours at this border crossing through an agreement with U.S. Customs and Border Protection. Monica Ortiz Uribe/KJZZ

A U.S. customs officer waves a cargo truck through the port of entry in Santa Teresa, New Mexico. Dell is financing extended hours at this border crossing through an agreement with U.S. Customs and Border Protection. Monica Ortiz Uribe/KJZZ
Listen Now

At Omega Trucking in Santa Teresa, New Mexico, employees check in on drivers moving loads across the border via walkie talkie. This is a family-run business that transports things like tiles and construction materials for bigger companies. The owner, Miriam Kotkowski, supports private investment at the ports because she believes it helps everyone, especially small businesses like hers.

“If we don’t have an efficient port, we don’t have trade,” she said. “And if the private sector is allowed to help, that is wonderful.”

Omega Trucking is located just a few miles north of the border crossing in Santa Teresa, where its trucks cross routinely. In the past, trucks traveling through this port of entry used to hit a bumpy dirt road soon after crossing into Mexico. That was 25 years ago, when Jerry Pacheco, a local businessman, stood out in a dust storm and envisioned the barren desert transformed into a bustling industrial hub.

Today his vision has started to take shape. Since federal funding isn’t keeping up with growing international trade and travel coming across America’s ports of entry, private companies and local governments are paying for improvements and upgrades to help move things along.

“Our commercial traffic grew 26 percent last year, which is one of the highest, if not the highest, rates on the entire U.S.-Mexico border,” Pacheco said.

Pacheco is president of the Border Industrial Alliance, a local group tasked with recruiting business to this area. His job got a bit easier once the road through Mexico was paved. But the biggest development came in 2009, when the Taiwanese manufacturer Foxconn set up a massive factory just south of the border fence. That plant now churns out about 55,000 Dell computers a day and sends them north.

“Foxconn itself is a huge win for us … because of all the truck traffic and development it’s brought to the port of entry,” Pacheco said.

The Taiwanese company Foxconn runs a 1.5 million-square-foot factory just across the border wall in San Jerónimo, Mexico. The factory assembles products for Dell.

But now, he said, federal investment in the port is lagging behind commercial investment around the port. Most of the money Congress allocates for the border goes toward security, not infrastructure.

“If we don’t continue to focus on the port … we’re not going to be competitive in the future,” Pacheco said.

As a result, the private sector has stepped in. This year Dell, the computer maker, will pay at least $200,000 to staff a southbound cargo lane four extra hours a day. The longer the border crossing stays open, the better for business. This is possible thanks to a special program that started in 2013.

“If a private entity is trying to perhaps increase business at an airport or get more commercial cargo through a port of entry, they can reimburse the government for our services,” said Chris Sullivan, director of alternative funding with U.S. Customs and Border Protection.

These services could include overtime pay for customs officers or infrastructure, like a new cargo lane or inspection facility. Local and state governments can also pitch in. For example, the city of El Paso, Texas, is using toll money to keep all lanes staffed on week days at a couple of its border crossings.

“It means that people during normal business hours … are waiting a fewer minutes in line, are able to get to class or to see a loved one or to buy their groceries or to go to work much more quickly and conveniently,” said Beto O’Rourke, the U.S. congressman who represents El Paso.

But it’s not enough, according to O’Rourke. Last fiscal year it cost El Paso more than a million dollars to shorten commercial wait times by about 20 minutes. Wait times at commuter lanes went down by an estimated 15 minutes. Even with that reduction, total wait times on commercial lanes can range anywhere from one to five hours.

Miriam Kotkowski, of Omega Trucking, said she’s hopeful that these partnerships with U.S. Customs will continue. “It’s a greater benefit to the industrial base,” she said.

With time, that investment could attract more commerce and help businesses like hers thrive.