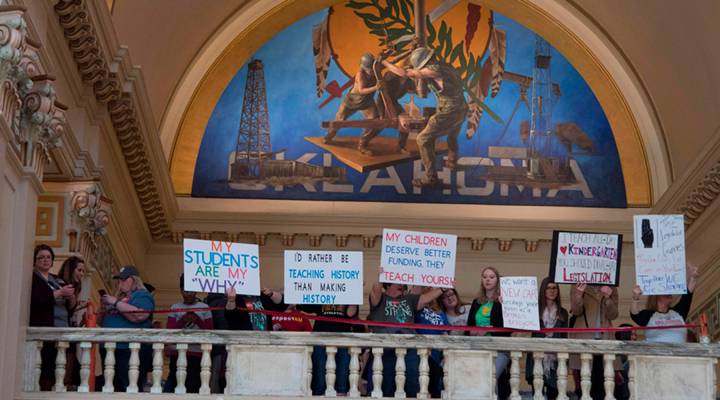 For the latest installment in the series, we hear from Tulsa, Oklahoma, teacher Teresa Danks, who after more than two decades as a teacher made headlines in 2017 panhandling for money to pay for school supplies for her classroom. Then, in 2018, she participated in a walkout with tens of thousands of other teachers, demanding raises and increased funding for education. While they eventually won $6,000 raises for teachers statewide, many, including Danks, were disappointed with the deal. Her disappointment was compounded a couple months later when the Tulsa Public School District asked her to sign a new contract without telling her how much she would be making.

My name is Teresa Danks, and I am — or was — a third-grade teacher in the state of Oklahoma. And I’m also known as the panhandling teacher.

I told my husband, I said, “I’m just so tired of begging,” and he jokingly said to me, “Well, I guess if it gets any worse, you could just make a sign and go to the streets like the panhandlers do.” And I said, “You know what, I think that would make a very good picture for social media.” I said, “That is exactly what we’re doing. We are begging.” So I had him take me over to a dollar store, I bought the poster board, got the markers and I wrote, “Teacher Needs Supplies. Anything helps.”

I was completely caught off guard when people started rolling down their windows, not only handing me cash, but thanking me for being a teacher. I had a young lady say to me, “A teacher like you is the reason I’m alive today.” Like 24 hours later, just everything started blowing up. And so we set up an account and we started the nonprofit Begging for Education. We collected around $40,000 to give back to teachers in the state of Oklahoma last year.

After the walkout, come the end of the school year, they were asking us to sign our contracts without even knowing exactly what it was going to be. And, I don’t know, it’s just me, I just said, you know, I’m not going to be bullied into signing a contract.

I started doing online teaching, and I’m actually teaching English to children in China. I was able to replace my income in just a matter of a couple of months and actually make more money doing this than I did putting in about 55 to 60 hours a week teaching in the classroom. I get to do what I love, which is teach, I don’t have to deal with any of the political red tape and all the other garbage that’s going on with public education, and I don’t have all the anxiety and the stress.