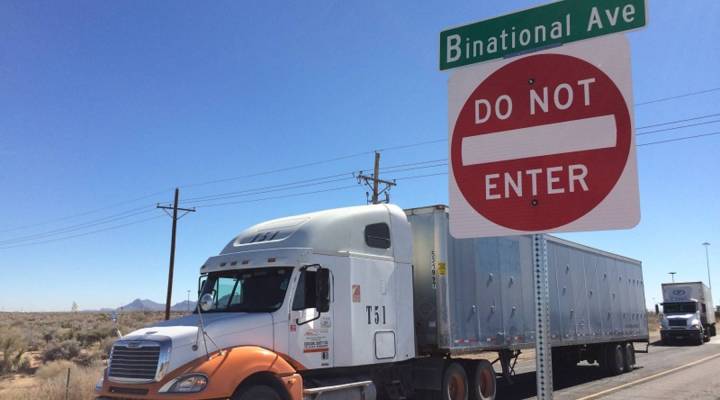 COPY
A truck travels northbound from Mexico into the United States at the Santa Teresa port of entry in New Mexico. Monica Ortiz Uribe/KJZZ

A truck travels northbound from Mexico into the United States at the Santa Teresa port of entry in New Mexico. Monica Ortiz Uribe/KJZZ
Listen Now

At the border crossing in Santa Teresa, New Mexico, nearly 200 trucks a day move thousands of Dell computers assembled at a factory in Mexico into the United States. The company also moves materials south needed to assemble its computers.

“For some time Dell has been anxious… to increase the volume going south bound to its manufacturing facility in Mexico,” said Karl Laskas, who heads up global trade for Dell.

The one thing holding the company back? Limited hours at the port of entry.

Federal funding to upgrade America’s ports of entry isn’t keeping up with growth in international trade. As a result, private companies and local governments are offering to pay for improvements themselves.

Dell signed onto a program hosted by U.S. Customs and Border Protection that allows private companies and local governments to reimburse the federal government for additional services. So Dell, for example, refunds officer overtime so the south-bound border crossing at Santa Teresa can stay open extra hours on weeknights. The company started this partnership in January.

“We initially anticipated a 15 percent increase in volume and we’re exceeding that,” Laskas said.

Other participants in the Reimbursable Services Program include airports and seaports nationwide. The city of El Paso uses toll money from its international border crossings to keep busy commuter and commercial lanes fully staffed on weekdays.

“Nobody likes to wait in line,” said Mathew McElroy, director of international bridges for the city of El Paso. “We need to keep pushing to find more and more ways to reduce wait times.”

Others have used the program to pay for construction of additional cargo lanes or new inspection facilities.

“Public/private partnerships are the wave of the future in my opinion because…we’re just trying to do more with less,” said Chris Sullivan, director of alternative funding for CBP.

In the last three years, Sullivan said the program has helped reduce wait times at participating ports of entry by an average of 30 percent.