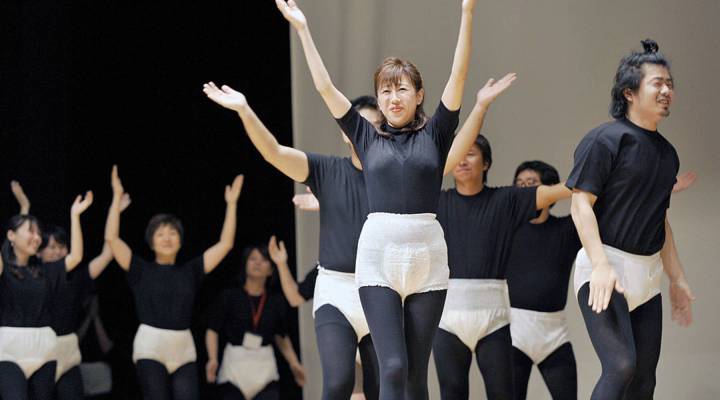 COPY
Japanese models wear the latest style of adult diapers during its fashion show in Tokyo. The show introduced a collection of 170 adult diapers and smaller pads with men and women walking and striking a pose to the tunes of 1980s British and American pop and rock music.    YOSHIKAZU TSUNO/AFP/Getty Images

Japanese models wear the latest style of adult diapers during its fashion show in Tokyo. The show introduced a collection of 170 adult diapers and smaller pads with men and women walking and striking a pose to the tunes of 1980s British and American pop and rock music.    YOSHIKAZU TSUNO/AFP/Getty Images
Listen Now

Japan is now arguably the oldest country in the world. It wasn’t like you could see it while walking around Tokyo, or the countryside (at least, not in most places). But there was one easy way to spot the shift. Just turn on the TV and it’s likely you’d spot something like the following scene: three ladies of a certain age, sightseeing and strolling, arm in arm, down a city street, dressed in pastel jackets. But one of them seems to be distracted — worried about something.

Hiromi Yamaguchi, a research analyst with Euromonitor International, a global market research firm, translated the scene, explaining “she is more of looking for toilets rather than enjoying the time with her friends.”

While an ad for incontinence products for seniors might not sound like a big deal, according to the World Bank, more than a quarter Japan’s population is over 65. At the same time the country’s birthrate is plunging. This means seniors have fewer grandchildren to reach into their pockets for and more money to spend as they see fit. But according to the Pew Research Center, in Japan there are now more diapers produced for adults than for babies.

And it’s not just hygiene products. “Of course Japanese manufacturers have to deal with these changes,” Yamaguchi said.

“I’ve seen this not just [in] food, retailing, or even hygiene, it’s almost everywhere,” Yamaguchi said. While there are many estimates as to how much Japan’s senior population is worth – up to $900 billion in U.S. dollars, notes Yamaguchi — “this is not something you can ignore.”

All kinds of companies are having to shift what they produce in order to keep up with a changing consumer landscape. Stores are slowing down escalator, and you can order groceries without the internet — even using the old fashioned telephone. Japanese stalwart Panasonic created J-Concept, an entire line of products — just for seniors.

“They are very discerning,” she said of the older generation of consumers. “So we regard them as people who aggressively choose to buy good things. So we decided to introduce products, targeted for these people.”

The company, she said, took into consideration that Japanese seniors, already petite by American standards, tend to become even more so with age. The average height of a Japanese woman, notes Yamanaka, is 157 centimeters (5 feet, 1 and a half inches), “however, this senior citizen, 50s and 60s, the average height is 152 centimeters, (just under five feet), five centimeters shorter,” she said.

“So we make products which is more suitable for them — this height. For example refrigerators and washing machines designed for them to easily take things out.”

Because of their stature, products designed elsewhere can be inconvenient for a smaller Japanese population, requiring climbing or reaching to access wet clothes in a washing machine easily.

“In Japan, most people have backache,” Yamanaka said.

In rural areas, many Japanese live in houses with two stories. And stairs. “And these people will clean up their house, stairs, holding up vacuum cleaners. And for them, the average weight, four kilo, was very heavy.” Almost nine pounds. So Panasonic created a lighter vacuum.

But companies aren’t just making changes to products, they also have to change the way they’re advertised. To reach a new kind of Japanese senior.

Says Anthony Cundy, CEO of Wunderman Japan, a network of advertising, marketing and consulting companies,  “just occasionally something happens that is so dramatic, that it forces things forward. A magnitude nine earthquake which shifts a whole continent three meters to the left in a matter of seconds, that’s pretty dramatic.”

In addition to the pain and legacy the country is still dealing with, the disaster also caused a major shift in attitudes, notes Cundy.

“It has brought out, I think, a more independent spirit within the Japanese people, and a more questioning spirit. And a thought of what do I really want out of the time I’m allotted here.”

The generation that’s now in its seventies was born during a difficult time — after World War II.

“You hear stories from these people about when they were children eating dirt, because they had nothing as they were rebuilding. So really, everything for them, was about how you built the country up. Everything was about our united good,” Cundy said. But that’s changing.

Now, Cundy said, some advertisers are aiming more for bucket list items, and using a classic marketing strategy to do so.

“You don’t want to give people a mirror, you want to give them a magnet,” he said. “And if you’re a 70-year-old, and you’ve got full health, and you’ve got some money in the bank, do you want to watch lots of old people sticking stuff to the roof of their mouths?  No. you want to see someone on a Harley Davidson, tearing up the street, during the day, because you couldn’t do it before.”

But Japan’s seniors can now. And advertisers know it. Take one ad touting an incontinence product for seniors featuring a paralympic skier.

“They used him to say listen, this kind of diaper is not holding me back,”  Cundy said.  “Instead of saying I’m sorry, you’re old and you have to use this and maybe you can sing an old song in the corner and be happy in the corner. It’s saying no, you have a life to live.” 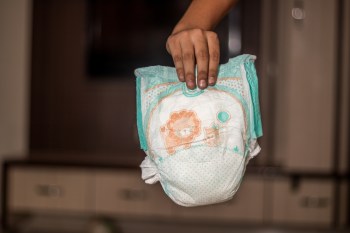