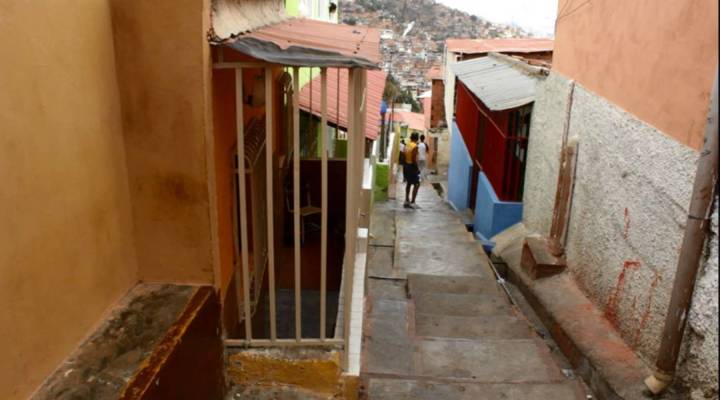 COPY
The barrios of Venezuela.  Scott Tong/Marketplace
The Resource Curse

In the petroleum state of Venezuela, the oil price crash has worsened what’s already an economic emergency. Food and medicine are scarce. So residents are asking for help from anyone they can, including public radio reporters visiting from America.

Yesman Utrera is the fabulous translator I hired in Venezuela. Often we call these short-term colleagues “fixers.” They set up interviews, arrange travel, keep us alive (which matters in Latin America’s most dangerous place). Yesman is the best. Before I went, he delivered this selfie via WhatsApp so I’d recognize him at the Caracas airport.

After landing, I handed over the one package Yesman asked me to schlep from America: a sack of diapers, size infant large. For his five-month old daughter, Issa.

Even nappies are in short supply in Venezuela, along with flour, rice, milk, cooking oil, condoms, bug spray. You name it. The problem is, the country only makes oil. That’s it. Virtually everything else is imported.

“And with the drop in the oil prices, now we have less money to import food in the supermarkets,” Yesman said. “So scarcity will get worse.”

It doesn’t appear Venezuela makes any diapers at home. Domestic producers struggle to stay afloat for several reasons: Under the regime of price controls, the state sets ultra-low selling prices. The strong currency (fixed by the government) makes exports expensive overseas, rendering them uncompetitive globally. And the government has taken over — or expropriated – a good portion of private-sector firms.

In Yesman’s slum and across Venezuela, everyone suffers from shortages. The answer: the black market, for those who can afford it.

A construction worker in the barrios. (Photo credit: Scott Tong/Marketplace)

Yesman does. He takes me to the slum where his old friend Nazareth lives. She’s his diaper dealer, a professional re-seller. Scalper. Every morning, she lines up outside state supermarkets before dawn, and when they open she buys whatever is available. It turns out Nazareth contributes to a fairly sophisticated diaper (and food and medicine) supply chain that relies on bartering.

“We have a network of re-sellers,” Nazareth said. “We talk about what our clients need. If I need 10 bags of diapers, my colleagues will give me diapers and I’ll trade them rice or flour.”

The black market network features a kind of honor code, Yesman explains. If, under the government price, two small sacks of corn flour equal one bag of coffee, the same ratio applies when bartering. Typically, buyers find sellers through friends, or through chat groups on Facebook or WhatsApp.

The pricing structure is fluid, Nazareth said, based on scarcity and urgency. Right now she sells coffee at 10 times the normal price. Corn flour: 25 times.

“Sugar, coffee, corn flour and rice are really hard to find,” Nazareth said. “And people know it. So we’re savvy enough to ask for good money.”

Nazareth quit her day job as a parking attendant to work as a full-time re-seller. Before, she made minimum wage every month. Now, she earns double that — in a single day. Yesman, her customer, can accept that, even though he receives a Friend Discount of zero.

Others aren’t so forgiving.

“I want to punch her,” my hired local photographer Jorge Galindo said. “I have rage.”

Nazareth apologizes for nothing. She’s simply trying to survive in this collapsed petro-state. By most accounts this is the most miserable economy in the world. GDP shrank 10 percent last year. Inflation runs at an estimated 400 percent. The currency has lost 80 percent against the dollar in one year.

And Nazareth says life as a scalper isn’t necessarily safe. Once a fight broke out next to her in the pre-dawn supermarket line. One man split another’s head open with a large can of milk powder.

So now, she says, milk doesn’t come in cans any more.