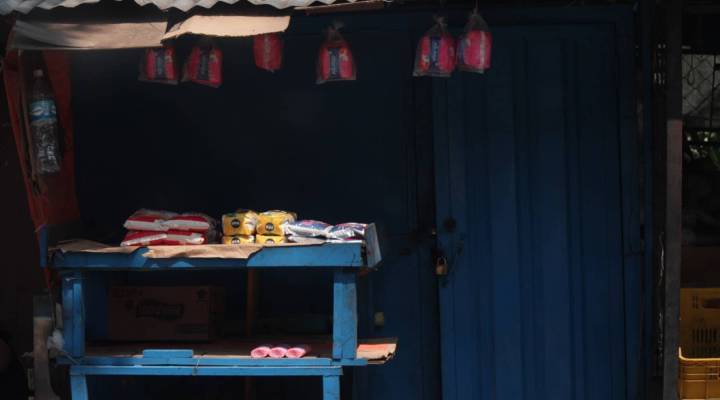 For three years in a row, Venezuela has reported the highest inflation rate in the world. The reported rate is 186 percent, though independent estimates range from 400 percent (by Johns Hopkins economist Steve Hanke) and 720 percent, a projection by the International Monetary Fund.

According to the IMF, the country’s economy shrank 10 percent last year and is projected to contract an additional 8 percent in 2016.

And Venezuela’s currency loses value by the day. A year ago on the black market (which virtually everyone uses), one U.S. dollar bought 200 Venezuelan bolivars. Today, it buys more than 1,000.

Imagine your grocery bill going up 17-fold. That would come out to something like:

This tries to capture the reality of Venezuela.

Single mom Noslen Ramos queues up daily outside state supermarkets in the western city of Maracaibo, which is two hours from her home. She is a mother of three and sells empanadas on the street for minimum wage.

“The situation is critical,” Ramos said. “We need flour and rice. And coffee. Right now, we have no food for lunch.”

Crude oil prices have crashed, and so has normal life. Around 20 people line up in front of the store, but 200 more have been shooed around to the back alley, ostensibly to hide the crisis.

“It’s common to sleep in line,” Ramos said. “If we come at five in the morning, there’s already a big line. The people in the front, they probably slept here.”

On any given morning, there is no guarantee anything will be on the shelves when shoppers arrive. Even if items are available, each person can only buy two of any item in a week, said Ramos’s sister Michelle Suarez.

“The problem is, our family has 12 people, Suarez said. “So two bags of rice lasts just one day. So we go to other supermarkets and shop all day. Some stores don’t take cash, but I don’t have a debit card. And the bank says there’s not enough plastic to make more.

If they don’t find rice here, they’ll buy a bag at a place where they know it’s available – the black market. The price is steep: a one kilo (1.6 pounds) bag of rice costs the equivalent of two days of pay. A large can of milk costs one full week’s salary.

Essentials products out on a table at the black market.

Price controls destroy the profit motive for domestic makers, who sometimes sell their products for a loss. And the ruling socialist government has taken, or expropriated, entire private companies.

So Venezuela imports just about everything. But now there’s not enough oil revenue to buy imports.

“We are mixing two different illnesses right now,” Luis Vicente Leon said. “The illness coming from the intervention, and the impact of the oil market.”

And the country has printed so much money, inflation has soared. During my trip, a national newspaper showed on the front page this graphic of the country’s ballooning money supply.

Shortages drive anyone who can afford it to the black market. Mostly, bootleg sales take place underground: buyers find sellers through friends, or through closed chatgroups on Facebook or WhatsApp. It is illegal activity, after all.

But in Maracaibo, the black market is an actual place. The “contrabando,” as sellers call it, sits on tables out in the open.

The odd part, to an American, is that this contrabando is available every day at Aisle 3 in my local Safeway: flour, rice, coffee, Tylenol. I went in with fixer/translator Yesman Utrera and photographer Jorge Galindo, on a specific mission: to find infant formula for our driver’s baby. By the time we found two cans to compare prices, both were sold.

At a couple points, I lost track of translator Yesman, when he started shopping himself for coffee and medicine. “Got to get it where you can,” he said.

We didn’t linger too long: Yesman and Jorge noticed the illegal sellers were nervous, and there is always a risk in Venezuela of violence and kidnapping. Back in the car, we jotted down the prices, comparing the state regulated price with the black-market price. Here’s that page from my notebook:

The average markup, by our quick-and-dirty math: 17 times.

Not everyone can afford these prices, of course. An elderly woman selling plantains at the market said she couldn’t find milk for her grandchildren at the official stores. And she couldn’t pay the scalper price, so she cobbled together her own milk substitute – from plantains.

“I open up the fruit and take the seed out – otherwise it hurts their tummy,” the woman said. “I cook it and blend it. Then I cook it again for 5 minutes, stir and add a little sugar. It’s the economy, you know?”

Back in the grocery line, the two sisters weren’t just hungry and frustrated about the shortages and black-market prices. They were furious — at people they considered profiteers in this crisis. Noslen Ramos said she assumed some of food missing from store shelves slipped out the back door.

“Every day when I walk to work,” Ramos said, “I see trucks loaded with flour, sugar, rice, shampoo, milk, driving to Colombia to resell them. I want to take a picture, but I’m scared what might happen to me.”

Michelle Suarez said she once hitchhiked on a truck loaded with basic consumer goods. At each military check point, she said, the driver bribed a soldier to go on through toward the border.

Before we left, Ramos cited a Bible scripture about a famine prophecy coming true. Things will likely get worse, unless oil prices miraculously skyrocket. By one estimate, the available petrodollars to buy food and medicine will shrink in 2016 by two-thirds.