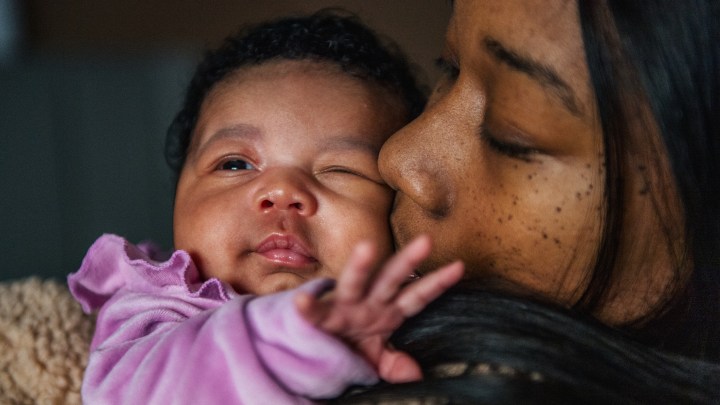 COPY
Kids use anywhere from five to 12 diapers a day (or more) for the first three years of their lives. That’s an expense of at least $80 a month. And that doesn’t include wipes. Brandon Bell/Getty Images

Kids use anywhere from five to 12 diapers a day (or more) for the first three years of their lives. That’s an expense of at least $80 a month. And that doesn’t include wipes. Brandon Bell/Getty Images
Listen Now

In the early days of the pandemic, when people were scouring store shelves for toilet paper, they were also making a run on diapers and wipes.

That was a problem for Charlin Hughes in Missouri, who works at the St. Louis Area Diaper Bank.

“We couldn’t get a shipment, the supply line was shut down. So I would spend–I spent probably three or four weekends just driving around the Walmarts,” she said.

Even before the pandemic, one in three families in the U.S. who needed diapers could not afford them.

Add to that a pandemic, millions of out-of-work Americans and a stunted economy and what you have is a major problem.

The St. Louis Area Diaper Bank now gives out 250,000 diapers a month, nearly double what they used to before the pandemic. Back then, they typically had 60 to 100 volunteers a week. But not this past year.

“We were bringing our family members in on the weekend, our quarantine circles, staggering them throughout the week. Some of us were working 12, 14 hours just to make sure we could get the product in, get it bundled and get it out,” Hughes said.

Kids use anywhere from five to 12 diapers a day (or more) for the first three years of their lives.

That’s an expense of at least $80 a month. And that doesn’t include wipes.

Without diapers, Hughes said, parents can get desperate.

“They may take multiple t-shirts and tie them around babies, they may take the last soiled diaper and find themselves cleaning it out – or lining it with newspapers, or line it with pads, anything absorbing, to line it with a towel until they can get what they need,” she said.

“The reason for that is because it lets you know that your neighbor is potentially so poor, that their child is sitting in their own mess all day,” she said.

Depending on the baby, even one dirty diaper can lead to a rash, which can easily get infected. And the effects aren’t only physical.

She’s found that diaper need is a predictor of postpartum depression in mothers, and can make it difficult for mothers and babies to form an attachment.

“If that’s the way you know how to soothe your baby and you can’t do it, because you don’t have a sufficient supply of diapers, it does become this issue around you, know child development, child well being,” Smith said.

Mothers such as Ashley Bass in Jerseyville, Illinois, agree.

“It’s one of those scary things,” said Bass. She has gotten diapers from banks for her 5-month-old daughter. “Like, if you can’t afford something for your kid, you kind of feel hopeless. Like, can you really take care of a child?”

Bass said she gets government help with her housing, her food, her health care. But diapers and wipes aren’t covered by any federal government program.

Jennifer Randles, a sociology professor who studies the intersection of race, class and gender at California State University Fresno, said parents’ need for diapers, as well as for work, can be a double bind.

“If they are struggling with diaper need and can’t get diapers, because they can’t afford it or because of what’s happened with the pandemic. They can’t leave their children with a childcare provider, they can’t go to work and then it just exacerbates that cycle of you know, lost hours at the job and possibly risk losing their job entirely,” said Randles.

But over the past year, we’ve already seen parents — including a disproportionate number of women — leaving the workforce.

Which may mean diaper banks will continue to be busier than ever.