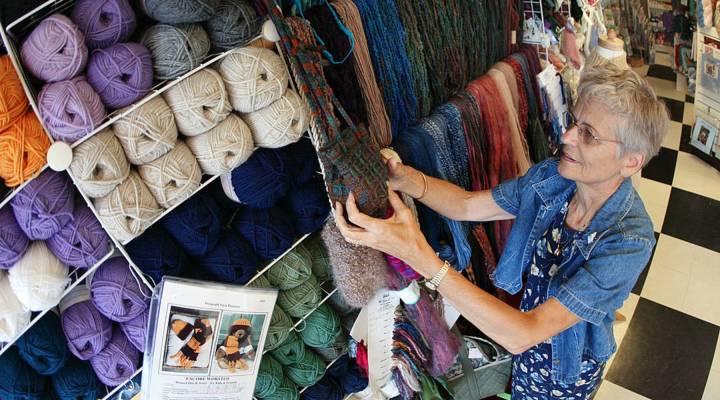 Is it still retirement if you’re working to make ends meet?

Sixty-eight-year-old Barb Blume arranges yarn at the Mosaic Yarn Studio July 26, 2002 in Des Plaines, Ilinois. Blume is a retired nurse who turned her hobby of knitting into a second career at the yarn studio where she is the assistant manager and knitting class instructor. Tim Boyle/Getty Images

Is it still retirement if you’re working to make ends meet?

Sixty-eight-year-old Barb Blume arranges yarn at the Mosaic Yarn Studio July 26, 2002 in Des Plaines, Ilinois. Blume is a retired nurse who turned her hobby of knitting into a second career at the yarn studio where she is the assistant manager and knitting class instructor. Tim Boyle/Getty Images

For a lot of Americans, the definition of retirement is expanding to include, um, work.

A new survey from the Transamerica Center for Retirement Studies paints a pretty grim picture, with four in ten people saying they expect to work during retirement because of shortfalls in savings and social security. Most people told Transamerica they still wouldn’t have enough saved by age 65 and nearly 80 percent said they’re worried social security won’t be there when they retire.

The retirement worries span all generations, but Baby Boomers led the charge, with two-thirds saying they’d keep working after retirement, or not retire at all. Forty-five percent said they expect their living standards to drop after retirement.

There’s a lot more in this release, but we put it to you: will you keep working after retirement age? What will you do, and for how long?

Some of you were blunt: retirement just isn’t happening.

@Marketplace As a Gen-Xer, I honestly don’t think I’m ever going to be able to retire.

@Marketplace Been without salary for a year now. Living off IRA and savings currently. I expect to be self-employed for the rest of my life.

Some of you left the door open to keep working, but voluntarily.

@Marketplace I have 29 years until retirement. Planning for work to be optional; only do it if I’m bored and want to feel productive.

@Marketplace I intend to keep doing what I do (proofreading/editing) in some form until I die.

@Marketplace 2 things: main business in Web security, and translation and proofing/editing. Can’t imagine not being active

And finally, some of you are mulling a career move.

@Marketplace going from software development to coaching and teaching. Definite drop in income.

@Marketplace something different. I am an accountant. I want to start a lawn service company.

@Marketplace pursue a passion (like import/distribute wine and spirits) with hope of making a few $ just to supplement IRA.

@Marketplace retirement is a long way off, but if I were presented with the opportunity to Have Opinions™ in exchange for money, I’d take it