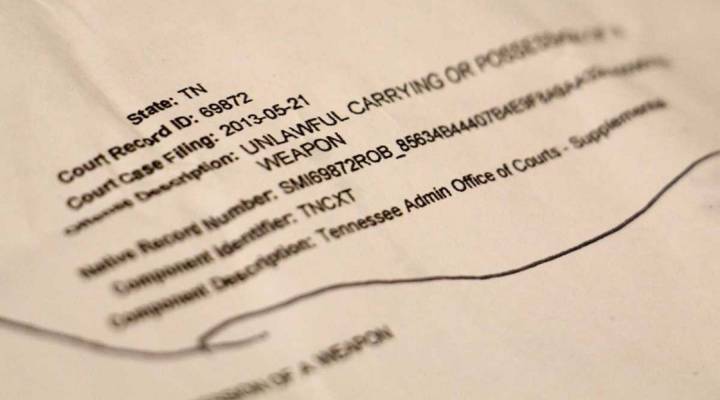 After I applied for an apartment in Philadelphia recently, the landlord, Miles Fischel, called to say something on my credit file had given him pause.

“You get a feel for people, and I just looked at this, and it just made no sense,” Fischel said.

The multiple felony convictions, including firearms charges, on my credit file were nonsensical to me, too.

TransUnion, the credit reporting giant, had confused me with someone with the same first name, last name and middle initial. We also were born in the same year. But our similarities ended there.

So I called TransUnion to try to figure out how this happened. Little did I know that I was in for a long and exhausting journey.

I finally got through to a dispute supervisor who only wanted to be identified as David. He’s based in Guatemala.

“I understand that you’re aggravated about the fact of having to deal with this inconvenience. But, as well, please try to see this from the landlord’s perspective. They wouldn’t feel comfortable moving somebody into their property that shows criminal records,” he said.

Paul Stephens, the policy director at Privacy Rights Clearinghouse, has seen this many times before. He said though credit reports hold enormous sway over our financial lives, the long files credit reporting agencies keep on consumers are sometimes full of errors, and getting those issues addressed doesn’t happen fast.

“Consumers will often find that their dispute enters a black hole,” Stephens said.

Landlords and other can access reports from agencies like TransUnion that contain lots of information beyond credit scores.

Over the last five years, the Consumer Financial Protection Bureau has received about 110,000 complaints about info from credit agencies. In a written statement, TransUnion said that under 5 percent of people have trouble with its credit reports.

Philadelphia attorney Lou Schwartz has represented some of those people.

“Very often when the information is placed on the credit reporting agency information sheet, they don’t do the proper background check to make sure they have the right John Smith,” he said.

My landlord showed me the report he got back on me, and in the fine print, TransUnion says “users,” namely landlords like him, employers or insurance brokers are responsible for verifying the information.

Shortly after I contacted TransUnion for this story, the company notified me it had “suppressed” the charges from my file.

I paid $35 to have my landlord run the screening. So I asked him, are the reports even helpful?

He said they can be, but he didn’t use them for a long time, and here’s what happened when he went just on gut feeling: “Couple of clunkers here and there, but even with credit checks I’ve had those couple of clunkers because you never really know,” he said.

Now I’m going to try to not be one of those clunkers.