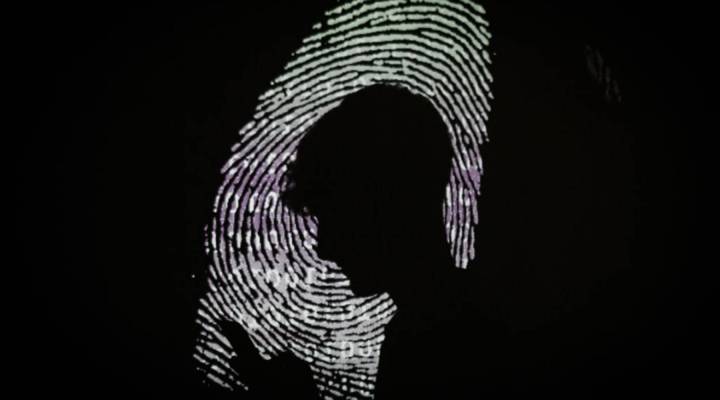 COPY
In this photo illustration, a man is seen using a mobile phone in the light of a projection of a thumbprint on August 09, 2017 in London, England. Leon Neal/Getty Images

In this photo illustration, a man is seen using a mobile phone in the light of a projection of a thumbprint on August 09, 2017 in London, England. Leon Neal/Getty Images
Listen Now

Here’s a number for you: 1 million. That’s how many children were victims of identity fraud in 2017, according to data from Javelin Strategy & Research. Sixty percent of those affected know the person who stole the child’s identity, which resulted in $2.6 billion in total losses and over $540 million in out-of-pocket costs to families. A new federal law that went into effect in September made it free for parents to make inquiries about credit files in their child’s name and freeze a file if necessary.

Heather Karpinsky’s putting that new law to use. Her 5-year-old son Gavin’s identity was stolen recently. When her returned from vacation in August, Karpinsky said there was a lot more mail than they were expecting and much of it was addressed to Gavin.

“At first I thought they were advertisements, so I ripped them up and threw them away. It wasn’t until a week or so later that I started getting collection notices in the mail, also addressed to my son,” said Karpinsky. “I opened those up and found some pretty hefty bills. I called the company and they told me that Gavin had been a regular customer of theirs for quite some time, and I was quite surprised.”

A few weeks later, Karpinsky discovered her son’s information had been stolen from their pediatrician’s computer. The next step?

“I had to send a police report with a letter, as well as all of Gavin’s information to all three of the credit bureaus to request that his credit be frozen.” Karpinsky explained.

So, how can parents protect their children from becoming victims of identity fraud? Jerry Linebaugh, founder of JLine Financial in Baton Rouge, Louisiana, shared four things to keep in mind when thinking about your kid’s credit.

1. For hackers, your kid’s identity is worth more than yours.

You’re never going to check a kid’s credit until they need to go to college or get a car. That’s a long time. If it’s your identity, you’re probably going to find out sooner because you’re actively using it. Maybe it’s a credit card offer, maybe it’s a new home purchase or a car. A kid is the holy grail of fraud because no credit is good credit and hackers can easily open two or three different credit cards right now. It’s just a treasure trove.

2. Call the credit bureaus and check if your kid has a file.

3. Even if there are no issues, take steps to protect your child’s identity.

If you find there are no issues and there isn’t a file, then tell the credit bureaus that you want a file created for your child and you want to freeze it. This is one of the best proactive things you can do for your child because thieves are snooping and they’re looking for this credit. In order to freeze your child’s credit, call the bureaus or you can also easily find the credit freeze on all three websites now because of the law. Make sure you’re dealing with credit freeze. You can lift the freeze whenever you like through the same process. Merchants and purveyors of credit are also ready for the new world that we live in, so they’re going to be more accommodating.

4. A credit freeze isn’t the same as a credit lock.

Identity theft is not something that credit bureaus have been lost on over the years. They’ve always known about kids being able to be hacked or hijacked on their credit and the tool they used to use was something called a credit lock. That’s a financial services product for sale and it does not come with the same protections as the law that just went into effect in September. Credit lock is not the same thing as a credit freeze. A freeze is more work for the credit bureau, it puts them on far more liability, but doesn’t take any more effort for the requestor.