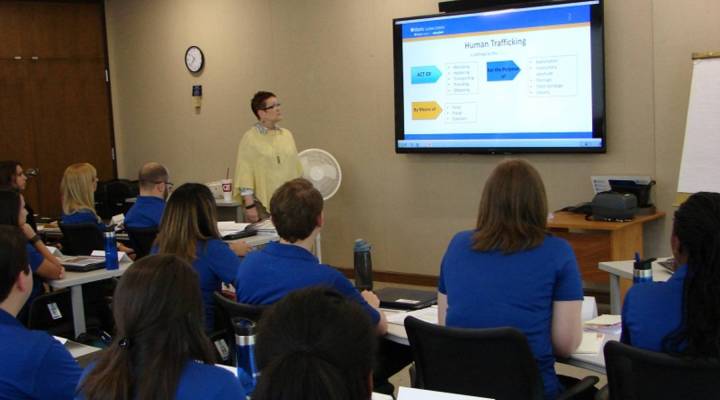 Events like the Olympics are great for local businesses, but some of those businesses may not be too savory. Reports of human trafficking go up during events of all kinds from big games to trade shows to political conventions. Trafficking is highly profitable for the traffickers, and their job’s been made a lot easier thanks to the internet. But many of the victims are underage and they’re being used against their will.

Now, the business world has begun to take note and it’s starting to help.

Betsy Soltysiak works as a trainer for an event management company just outside St. Louis. Today she’s addressing a roomful of people about sex trafficking, pointing out that the Olympic Games can be a magnet for traffickers.

“Of course the World Series” is somewhere else traffickers can ply their trade, she said. “Who would think? It’s baseball, hotdogs, Crackerjack!”

Soltysiak’s boss, Maritz Global Events president David Peckinpaugh, had never thought about it either. He said until a few years ago he’d always assumed that kind of seamy stuff, like kids being sold for sex,  went on overseas. Then he began to do some digging.

“As I started researching, the very first article and picture I stumbled upon was a young girl being trafficked out of a hotel in St. Louis,” he said. “And you could see the St. Louis arch in the background.”

He wanted to help stop a practice he’d had no idea was taking place in his back yard.

He knew he and his employees could help because so much of their meeting and event work takes place in hotels – and that’s where a lot of trafficking happens, right under the noses of guests and staff.

Savannah Sanders is 31 now. She knows what it’s like to stand in a lobby shadowed by a pimp.

“There were definitely times where somebody could have noticed that there was something not right and made a call when I was being trafficked,” she said.

When she was 16, after years of abuse, she ended up being trafficked by a guy she met in a nightclub. She knew never to speak or make eye contact with others if she and her pimp were in public, but, she said, “I do feel that the times we stayed at a hotel, those were the instances that somebody had a chance to see me.”

Today she’s a victims’ advocate. She helps train hotel staff to spot signs of trafficking. She said if a man comes in with a young person who looks away, who doesn’t talk, that’s a potential sign. Or maybe a man checks in with documentation but has none for the teen who’s with him.

She said people may think this stuff doesn’t happen at nicer establishments, but that’s not true.

“A big resort that we were working with, we provided all their 300 staff with training,” she said. “And a week later they had made seven reports to the National Trafficking Hotline. And it was a five-diamond resort.”

At some hotels traffickers may be slipping money to staff to turn a blind eye. But in the last few years many hotel chains from Hampton Inn to Hyatt International have signed up to something called The Code. That’s when companies pledge to train their staff to recognize warning signs and promise to report anything iffy. Uber is one of the latest companies to sign up.

“We had a group of socially responsible investors that were really looking at the hospitality industry as an area of potential intersection with human trafficking,” she said.

She added that the company has now trained 55,000 staff all over the world.

But one thing neither Hyatt nor any other hotel I spoke to would discuss was whether the training had had results. Companies are happy to say they’re doing the right thing. They will not go so far as to admit a trafficking incident has taken place on their turf.

“I’ve been working at ECPAT for six years now,” she said. “And I used to hit up companies all the time. And they didn’t want to talk about this issue, they did not want to associate themselves with this issue.”

Nowadays, they’re actually calling her. Her next hope? That regular travelers will press the companies they use to combat trafficking.

“So when more people travel based on social responsibility for human rights,” she said.  “We’re going to see a lot more companies who will focus on human rights.”