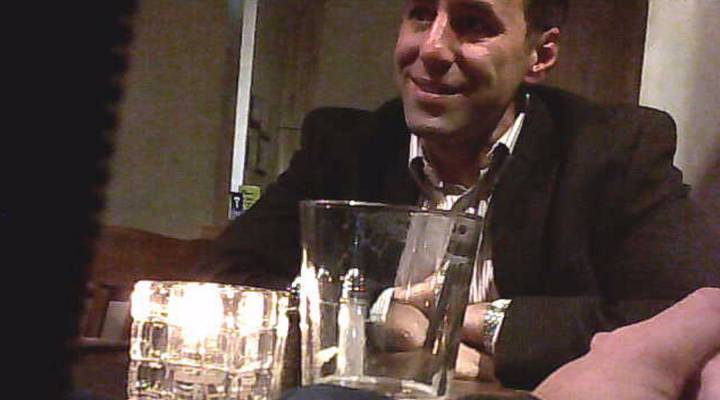 COPY
Surveillance video recorded by undercover detective Luke Hillman of the King County Sheriff’s Office during one of the league’s meetups in a Seattle bar November 10, 2015. King's County Prosecutors Office

Last year, Luke Hillman began meeting with a group of sex buyers. They were guys he met online.

“Looking at them in a bar, you would have no idea,” Hillman said. ”They’re just normal guys.”

The men worked for some of the region’s most prominent employers: Microsoft, Boeing, Amazon. One was a radiologist. Another was a dentist.

During their meetups in local bars, the men would discuss their “hobby” — hiring Korean prostitutes.

“I remember sitting there the first time, and I was just like … looking around, praying that nobody would see me sitting with these guys and would hear what they were saying,” Hillman said.

The men didn’t know that Hillman, the man they had invited into their elite circle, was actually an undercover detective.

Law enforcement is beginning to take notice of so-called “John boards” — review sites where customers rate prostitutes. The men busted in this Seattle group earlier this year exposed a secretive world where online sex buyers are treading on a whole new level of criminal behavior.

The men had met on TheReviewBoard.net (that now leads to a notice saying it was seized by the King County Sheriff’s Office). It’s one of many sites across the country where men rate prostitutes. Investigators estimate the Review Board had between 15,000 and 20,000 members.

The men would describe a woman’s weight, race, breast size, which sex acts she was willing to perform and her hourly rate.

Hillman wrote fake reviews and was invited to join a subgroup that called itself “The League of Extraordinary Gentlemen.” Police documents show they were spending $300 per session, multiple times a week.

The League attracted the attention of law enforcement not because its members bought a lot of sex, but because of how they worked together. The men wrote glowing reviews to draw customers to their favorite women. That kept the women in town longer and encouraged the seven agencies supplying the women to send new prospects their way.

“So they were really operating as pimps,” said Valiant Richey, a senior deputy prosecuting attorney for King County and one of the lead attorneys on the case.  “They’re charged with promoting prostitution because they expanded the market, they facilitated visits to these women, they connected new buyers to the women and helped with the screening process.”

Surveillance video recorded by undercover detective Luke Hillman of the King County Sheriff’s Office during one of The League’s meet-ups in a Seattle bar November 10, 2015. In this clip, League leader Charles Peters describes the growing number of “K-girls” (Korean prostitutes) in the area and concerns that the market has gotten too large.

“We’ve just taken down one small tentacle of what’s going on,” said King County Sheriff John Urquhart at a news conference announcing the arrests in January. “There are still umpteen websites out there that we haven’t gotten to — yet.”

Instead of charging the 16 league members with buying sex, a misdemeanor, they were charged with promoting prostitution — a felony. More than half have pleaded guilty.

At his sentencing, one of the men, Paul Rhinehart, expressed remorse and said he’d been drawn into friendships and lost perspective. “I took on a misguided feeling that this was a community like other legitimate communities,” he told the court.

About 15 percent of American men buy sex at some point. Only a small fraction of them are “hobbyists” like the men in Seattle. This review board is gone, but it has left a digital trail that could help law enforcement come to a better understanding of how frequent buyers operate.

Alex Trouteaud of youthSpark in Atlanta studied the data on North American sex buyers. He found 5 percent of them account for nearly half of illegal sex transactions.

In order to feed their habit, these buyers need to find new sources of sex and avoid the cops. That means they have to share intel.

“’John boards are far and away the fastest and easiest place to find these individuals,” Trouteaud said.

Prosecutors said the Seattle case opened up a new window into the sex trade, where internet crowdsourcing allows buyers to work together to blur the lines between supply and demand.

This story was produced with Reveal from the Center for Investigative Reporting and PRX. Hear more of Sasha Aslanian’s coverage on human trafficking at APM Reports.