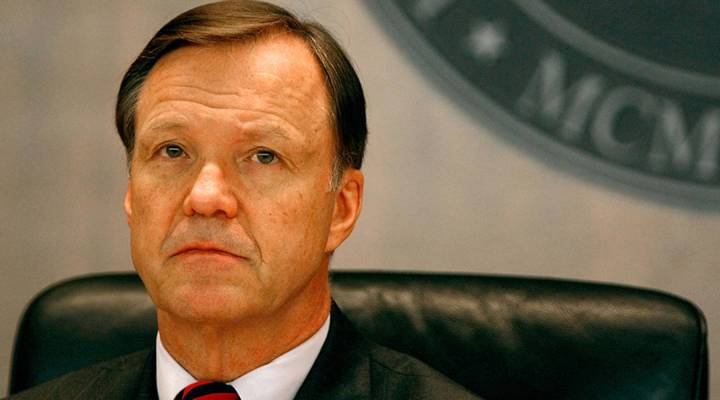 Congress took a step toward tighter internet censorship last week, depending on how you look at it. The House passed the Fight Online Sex Trafficking Act, which makes it easier to sue websites that allow sex traffickers to post on their sites. The bill changes previous legislation that made sure third-party providers, like websites, couldn’t be held liable for online posts by independent users. Section 230 of the Communications Decency Act was co-authored by then-Rep. Chris Cox, a Republican from California, and Democratic Sen. Ron Wyden of Oregon in 1996. Cox spoke with Marketplace Tech host Molly Wood about the legislation and why it may be time for an update. The following is an edited transcript of their conversation.

Chris Cox: The case involved a bulletin board, a post, on the Prodigy web service. The post said disparaging things about an investment bank and the bank filed a lawsuit for libel, but they couldn’t locate the person who wrote the post. And so instead the bank sought damages from Prodigy, the site that hosted the bulletin board, and so they were held responsible in this defamation case for a judgment of $200 million. So by the time I landed in Washington, I had roughed an outline for a bill to overturn that holding because it was so clear we needed a good Samaritan rule so that people would not be forced into a business model where they just had to be completely hands off and couldn’t do anything to clean up the internet.

Molly Wood: Well, and then, fast forward 22 years, we’re now having a conversation about the power of these platforms, the content that they host, the advertising that they take. And now, we’re looking at legislation that would hold websites liable for at least some of that content. Do you think that that’s the right approach?

Cox: Yes. What we decided to do in the law — and I had a legislative partner in this across the aisle. I was a Republican, he was, and is, a Democratic senator from Oregon now, Ron Wyden, and still a good friend. The two of us realized that there has to be a clear delineation of responsibility. You can’t let people off the hook, you can’t let people hide behind the protection that we were creating to do illegal things. That’s a pretty clear rule. I think it’s set out pretty clearly in the statute. It’s worked pretty well over the last 20 years. But at the margins we’ve seen courts stretch the rule a little bit too far and it’s produced some difficult results, and that’s what Congress is seeking to address right now.

Wood: So just to specify for people who don’t know, Section 230 definitely did not protect websites who were hosting illegal content or had some involvement in that. But can you give us some examples of how the rules gotten stretched?

Cox: Yes. In the 9th Circuit, it was decided in 2003, there was a one-person website. The website operator got an email, not through the website, but on his personal email. He read the email, decided that he liked it and decided to post it on his own website. And he edited it somewhat and he added his own commentary. The court said that Section 230 protected him from a lawsuit for defamation for repeating the defamatory email, which accused someone of being a Nazi apparently without factual basis. That to me was such a preposterous application of the law. You can see how the court cases can embroider a statute and take it to places that the authors never intended.

Wood: And where do you stand on the current attempts to modify Section 230 in the case of the legislation that was just passed in the House?

Cox: What Congress is doing right now is uniquely treating a single crime. My concern is that because the law that they are amending applies to all offenses, civil and criminal equally, that the courts will be somewhat puzzled by the different treatment. I think we need absolute clarity here that not just in cases of sex trafficking, but in cases of terrorism on the internet, in cases of murder for hire and all of the criminal activities that one might accomplish through the internet, the same ways you could use the telephone or telegraph in the old days, that in all of these cases the rule is the same.