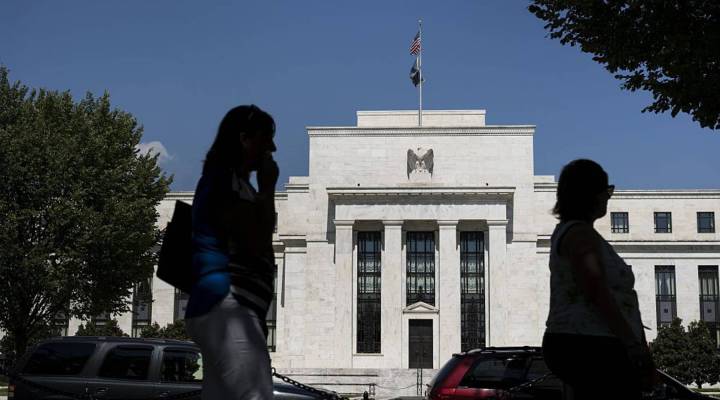 COPY
A view of the Federal Reserve in Washington, D.C., in 2015. Brendan Smialowski/AFP/Getty Images

A view of the Federal Reserve in Washington, D.C., in 2015. Brendan Smialowski/AFP/Getty Images
Listen Now

First, the Federal Reserve is a pretty complex place.  There’s the Fed in Washington we talk about every time interest rates are changed (or not changed). Then there are 12 regional Federal Reserve Banks, each with a board of directors of nine people.

That’s where the Democratic Party, and activist groups on the left, are aiming their fire.

Critics on the left, in addition to calling for more diversity within the Federal Reserve system, also want private banks gone from regional fed banks. “These private banks  get a say on who’s on those board of directors and they get representatives on those boards of directors,” said Ady Barkan, campaign director of Fed Up, a left-leaning group that’s pushed for changes at the fed.  “It’s an egregious example of regulatory capture.”

Barkan says that regional bank presidents tend to be more conservative, more hawkish on interest rates, than their counterparts in Washington D.C.  He blames both a lack of diversity and the influence of private banks. “You can’t imagine for example that cable networks would get some special role in choosing people on the FCC,” said Andrew Levin, professor of economics at Dartmouth College.

But the fed has already undergone some major reforms to limit influence. Under Dodd Frank, the private-bank representatives who serve on regional boards don’t get to nominate regional presidents anymore. “The bankers themselves are not involved in the choice of that person,” explained Stephen Ceccetti, professor of economics at Brandeis International Business school. “That is the person who participates  in monetary policy discussions and decisions.”

Lastly, he said, regional Fed banks aren’t responsible for actually regulating banks, “they don’t even get to see the stuff.”

Chair Janet Yellen herself has said that if the fed were redesigned from scratch, it would probably look pretty different than it did a hundred years ago, but, in her view, it works pretty well. Ceccetti agreed, saying “I don’t see that anyone’s been able to show that there’s any harm or pressure applied by the banks through their directors to the policy of the Federal Reserve.”

Changing the structure of the fed would require an act of congress.