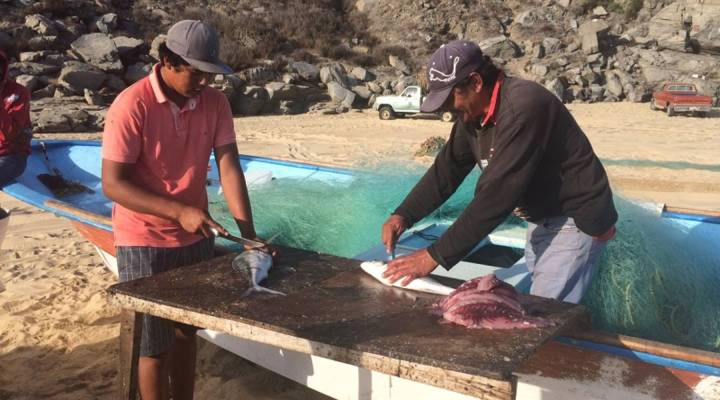 But construction is underway on a mega resort called Tres Santos that bills itself as local-friendly. And blending in hasn’t exactly been easy.

Yoga mats in the lobby of the Tres Santos main sales office in downtown Todos Santos.

“Our goal is to give people a really authentic experience. And so we’re gonna do something that kind of blends in with the community,” said Shannon Gillespie, the company’s sales executive.

Funded by Colorado’s Black Creek Group, Tres Santos has permits to build more than 4,000 new homes. So far, a handful of houses are for sale in the $200,000 to $400,000 range. Down at the town beach, a 32-room boutique hotel is under construction. But it’s practically on top of the area where the town’s fishermen have been working for generations.

Twice now, members of one fishing co-operative have blocked the road to the beach to protest the project. Tres Santos said it wants the fishermen to stay, but protest organizers like activist Ricardo Madrazo are skeptical.

“I think they envision that instead of the 40 or 50 boats that are operating right now, maybe they’ll just have four or five,” he said. “And they can show some of the visitors how we catch this fish, or we’ll take you out and you snorkel with the sea lions.”

John Moreno, the fishermen’s lawyer, said he’s not opposed to progress, but that in a town of 5,000 people, where it’s hot and dry, it’s a matter of scale.

“It’s going to give us triple the amount of our target population for Todos Santos within 25 years,” he said.  “That’s going to put enormous amounts of stress on our natural resources — primarily water.”

Moreno hopes a pending environmental review will thwart construction. Tres Santos has filed a lawsuit against its opponents.