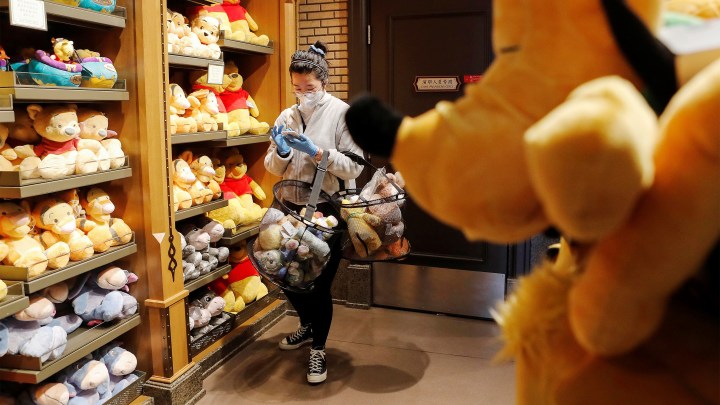 COPY
A woman shops at a store in Disneytown in Shanghai on March 9, 2020. STR/AFP via Getty Images
COVID-19

A woman shops at a store in Disneytown in Shanghai on March 9, 2020. STR/AFP via Getty Images
Listen Now

Consumers are the linchpin of the U.S. economy. Spending by or on behalf of consumers amounts to about 70% of economic activity in the U.S. Which is all well and good when consumers are feeling good. But what happens when that confidence goes away?

Behavioral economist Peter Atwater at William & Mary compared consumer confidence to a tower made of Legos which COVID-19 has shattered.

“It takes a very long time to build it up,” Atwater said. “It’s inherently very fragile.”

It takes an even longer time to rebuild it. It’s easier to scare people away from public spaces than it is to get them to come back. Economist Howard Chernick, the author of “Resilient City: The Economic Impact of 9/11,” said that after the Sept. 11 attacks, the travel and leisure industry took the first big hits. People didn’t feel safe in public spaces.

“Las Vegas, which is a very tourist-dependent city, basically shut down,” he said. Chernick sees some similarities today. Once this crisis blows over, he said, it could take the leisure industry quite a while to get back on its feet — at least another year.

John Gerner, managing director of Leisure Business Advisors, which specializes in theme parks, held this position during and after 9/11. What he learned was that in order to get people back out, companies needed to be transparent.

“We can’t talk down to our guests,” Gerner said. “We have to work with them and essentially say, ‘Look, this is what we’re doing, and we’re going to need you, the guest, to do your share.'”

Meaning consumers also play a part in making it safe to go back out there, by taking the recommended precautions. Like, staying home when they’re sick and washing their hands often.