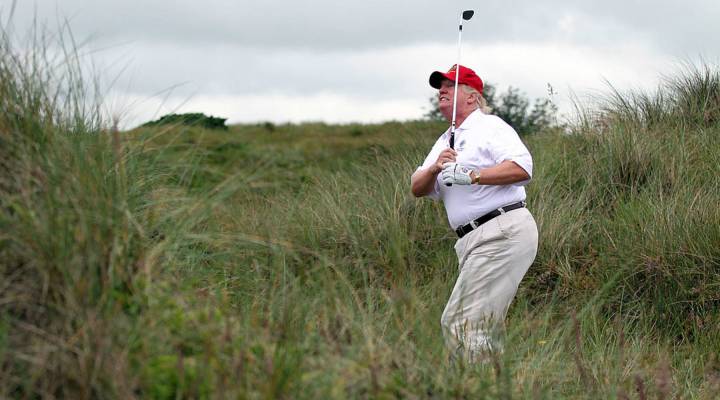 COPY
Donald Trump plays a round of golf after the opening of The Trump International Golf Links Course on July 10, 2012. MacNicol/Getty Images

Donald Trump plays a round of golf after the opening of The Trump International Golf Links Course on July 10, 2012. MacNicol/Getty Images
Listen Now

It is a spectacular golf course, snaking alongside a superb stretch of Scottish coastline, weaving  through majestic sand dunes, but the Trump International Golf Links on the Menie Estate just north of Aberdeen has provoked  intense hostility among some members of the local community.

“It was a beautiful piece of land, now it’s just another golf course. A precious nature conservation site has been vandalized,” said Martin Ford, a member of Aberdeenshire Council and a long-standing opponent of the development. “Mr. Trump has abused and insulted local residents. He’s been the neighbor from hell,” he added.

David Milne who lives on the boundary of the golf course would certainly agree with that assessment.  He claims the tycoon and his organization have bullied and harassed him for refusing to sell his home — a former coastguard station — which Trump described as an ugly blot on the landscape.  Milne alleges that Trump’s company planted a row of spruce trees along the front of his house just  in order to spoil his view.

Local resident David Milne in front of his home which Trump felt spoiled the view from his golf course.

Not all the local residents are ticked off with the golf course, however.

“I don’t mind it at all,” said Caroline Taylor who lives with her husband also near the boundary. “It’s a beautiful golf course. And  it’s brought jobs into the area. With the oil industry in decline we should be welcoming people bringing jobs into the area.” she said.

It was on economic grounds that the Scottish government championed the project. Trump promised a bonanza: a $1.5 billion investment, 6,000 jobs in the construction phase and more than 1,200 permanent posts.  But his critics complain that less than $150 million has been invested and fewer than a hundred people are employed at the course.

Sarah Malone — Trump’s Vice President  in charge of the resort — dismissed that complaint as premature.

“We’re only part way through this investment. It’s just the beginning of the story. This is a marathon not a sprint,” she said, also insisting that her company’s relations with most of the neighbors were “very good” and blaming a “few entrenched individuals” for the complaints.  Malone claimed that most locals, most Scots,welcomed the resort as a boon.

The entrance to the golf course.

“The North East economy is being seriously challenged with the downturn in oil and gas,” she said. “We need to back tourism and Mr. Trump has put his money where his mouth is.”

His mouth has caused him problems, though. After his comments about Muslims, the Scottish government stripped him of his role as unofficial ambassador for Scottish business, and he’s had an honorary degree at an Aberdeen university revoked. Relations with the government in Edinburgh were further strained when Trump objected to plans to build an offshore wind farm near the new course and launched a legal bid to block it. His legal action failed late last year.

One consequence of all the sound and fury  over the resort on the Menie estate should no doubt be a source of satisfaction for Donald J. Trump:  it is now the best-known golf course in the world. As Aberdeen’s head of tourism wryly observed: “It’s certainly helped  to put golfing in this area on the map.”