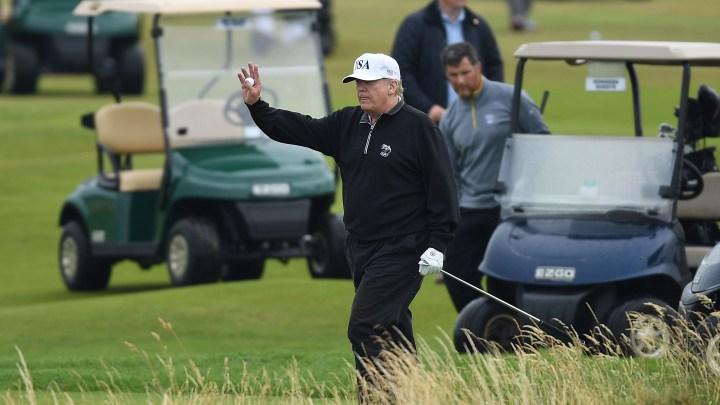 President Donald Trump is denying reports that he asked his British ambassador to curry favor with the United Kingdom’s government to steer a big golf tournament to one of his ailing resorts in Scotland, Turnberry.

Marketplace’s Nova Safo is following this story. The following is an edited transcript of his conversation with host Sabri Ben-Achour.

Sabri Ben-Achour: Nova, what exactly is the president alleged to have done?

Nova Safo: This is about the British Open, one of the major golf tournaments. The president reportedly asked his ambassador to the U.K., Robert Wood Johnson IV, to see if the British government could help steer the tournament to Trump’s Turnberry resort. Johnson reportedly did approach the Scottish secretary of state and raised the idea. This allegedly happened more than two years ago.

Both The New York Times and The Wall Street Journal say that the ambassador told multiple people at the time about Trump’s request.

Ben-Achour: As I mentioned, Trump says he did not ask Ambassador Johnson to do this. But remind us why it would be an issue if he did?

Safo: The president has not divested from his company. He continues to own the Trump Organization, but has turned over day-to-day operations to his eldest two sons.

And we’ve heard about this before. This means the Constitution’s emoluments clause becomes an issue.

I spoke this morning about this with Jessica Tillipman, assistant dean at George Washington University Law School where she teaches about anti-corruption and compliance. Here’s what she had to say:

Jessica Tillipman: When we’re dealing with the foreign emoluments clause, it’s quite broad in nature, which prohibits, effectively, a government official from accepting any type of gift or present from a foreign government without the consent of Congress.

Safo: And what would be the gift in this case? Well, Turnberry is reportedly not profitable. And the British Open could potentially pump tens of millions of dollars into a local economy. So there you have it: Turnberry hosting the British Open would benefit the president’s company.