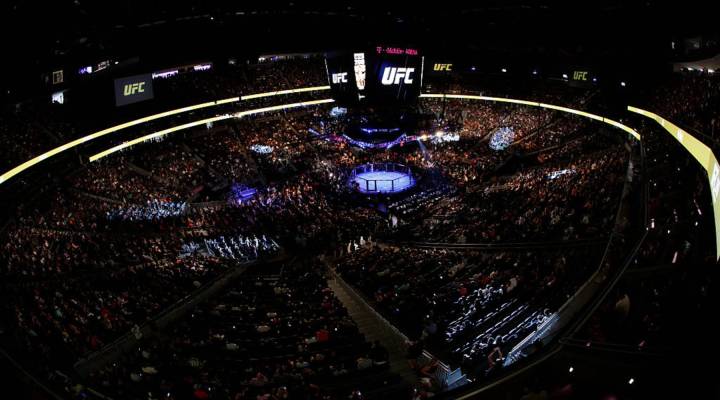 The Ultimate Fighting Championship, better known as UFC, sold itself Monday to a talent agency for a whopping $4 billion. The deal with WME-IMG  and private equity giants, including Michael S. Dell, is reportedly the most expensive transaction for an organization in sports history. It’s a big deal for a sport that Sen. John McCain once called  “human cockfighting.”

How did the sport get so popular? People in the mixed martial arts world put it like this: You’re walking down the street, and you come to four corners. On one corner there are guys playing basketball, on another there’s soccer. The third corner has guys playing catch. And in the fourth corner, there are two guys fighting.

“Which one are you gonna watch?” asked Joe Favorito, a sports marketing consultant. He also ran a mixed martial arts league and sold it to UFC eight years ago.

The answer, now more than ever, is people are going to watch the fight, he said. Part of that is human nature, but also the UFC did all the right things to go mainstream.

MMA was banned in many states. Now it’s legal in all 50. And the UFC focused on getting more people to watch, said Christian Vaccaro, who teaches sociology at Indiana University of Pennsylvania and wrote the book “Unleashing Manhood in the Cage: Masculinity and Mixed Martial Arts.”

“They drew heavily on reality entertainment television to promote the sport across several different networks,” he said, from Spike TV to Fox Sports to subscriptions to online events.

Brett Boyle, who teaches marketing and sports business at St. Louis University, said talent group IMG already has a strong digital presence. So it’s no wonder it wants to steer UFC’s growing millennial fanbase toward its content. Because those millennials?

“Not only is it a large group of people, but it’s folks with spending power,” he said.

And that all adds up to a real sports knockout.