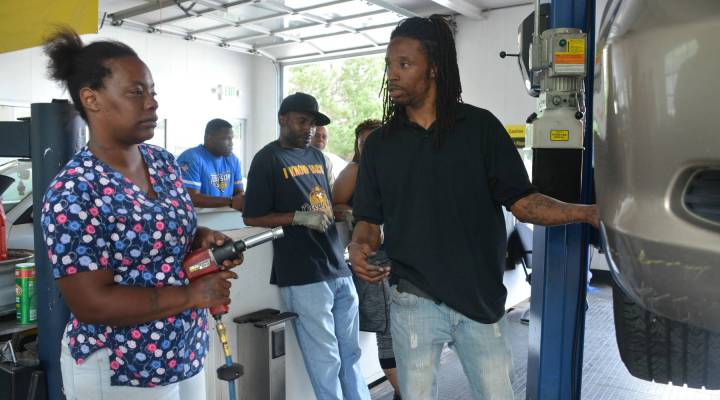 In a garage on the west side of Baltimore, Danielle Slater raises a gold Honda minivan on a hydraulic lift. When it’s about four feet off the ground, she and her husband Alexander get to work removing the wheels to replace the brake pads.

It’s all part of a free 12-week course they’re taking together. They’re both in their early 30s, with six kids between them, and both on welfare. They get close to $800 a month in Temporary Cash Assistance, as cash welfare is known in Maryland.

Twenty years ago next month, a fundamental change took place in this country. President Bill Clinton signed the 1996 Personal Responsibility and Work Opportunity Reconciliation Act, known as welfare reform. The main goal was to get people into the workforce and off welfare as quickly as possible.

As a result of those changes, the Slaters each have to spend 40 hours a week in some sort of “work activity” to qualify for cash welfare. That could mean a job, volunteer work or short-term job training like the auto technician class. When the Slaters graduate, they’ll be qualified for entry-level auto repair jobs.

“I always pictured myself with Jiffy Lube,” said Danielle Slater. “Probably because they’ve got more commercials.”

For Alexander, it doesn’t matter where he starts out.

“Our dream is to open our own business,” he said.

It’s a long way from here to there. Neither of the Slaters finished high school and Alexander has a criminal record. They live in West Baltimore, which erupted in violence last year after Freddie Gray, a young black man, died in police custody. The local Catholic Charities started the auto tech training program in response to the unrest, to create more opportunity for people facing significant barriers to finding good jobs.

Those barriers include “housing, mental health, substance abuse, alcohol, criminal backgrounds,” said program manager Anita Donaldson. “This program says, ‘Come here, and we’re willing to help you get through that so that you can continue on your path to self-sufficiency.’”

When they’re not learning to rotate tires or change oil, the 14 students in the program practice “soft skills,” like sitting up straight and making eye contact during interviews. They also support each other, Alexander Slater said.

“To actually have a group of people around you that actually believes in you, it’s a motivation, something that I never had,” he said. “I’m used to people who are looking for me to fail.”

He and Danielle graduate later this week. Starting out, they can expect to make $11 or $12 an hour – enough, they hope, to leave welfare behind.

Hear the full story on the final episode of Marketplace’s Wealth & Poverty podcast, The Uncertain Hour.