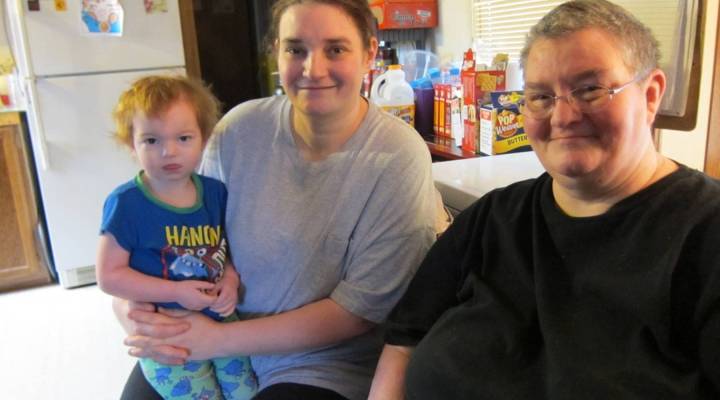 This story is from our new podcast, “The Uncertain Hour.” Check out the full episode here or subscribe.

Twenty years ago, in the summer of 1996, there was a raging policy debate. The subject at hand, in the words of then-President Bill Clinton, was: “ending welfare as we know it.”

In those days, cash welfare was what policy wonks call an “entitlement.” In the strict sense it meant, a woman with kids under a certain age, whose income fell below a certain threshold was guaranteed some amount of cash help.That word had shifted in meaning, along with the public’s attitude about welfare, and welfare recipients.

The 1996 reform meant that no family was “entitled” to cash welfare, sending scores of women into the workforce, and setting time limits on how long poor families could get help.

As with any big policy debate, Marketplace covered the story closely in 1997. Among the important stakeholders were welfare recipients themselves. Our reporter interviewed a single mother with six kids, who was in the middle of transitioning from the old system to the new one.

Her name was Josephine Moore and she lived in the coal-filled hills of Kermit, West Virginia. The economy was depressed. Josephine — Jo for short — took our reporter on a tour of the tiny town, pointing out a number of shuttered businesses.

The steep driveway that leads to Josephine Moore’s hilltop trailer in Kermit, WV.

The recording captured the sound of the train going by, carrying fewer and fewer containers of coal. Given how bad the local economy was, Jo was worried about how she would fare once the work requirements and time limits of welfare reform took effect.

“Everybody that’s on welfare in the United States. I don’t know how they’re gonna get everybody a job,” she said. “I just don’t know how. I don’t think they can. You can’t just cut it off and say sink or swim, cause we’re talking about people.”

Marketplace’s Krissy Clark and the Wealth and Poverty team tracked Jo down, and returned to visit her, meet some of her — now grown — children and see how they did fare over the past 20 years.

Today Jo is 59, still lives in Kermit, West Virginia, in a small trailer up a very steep muddy driveway. Beneath the hillside lies an abandoned coal mine. When Marketplace first met Jo, she lived in a house, and her sister occupied the trailer at this same plot. The house has since burned down, remains of the foundation peeking out amid a near-sea of aluminum cans. Eventually Jo will collect them all in exchange for a few hundred dollars, covering the bills for a month or two.

Scattered cans to be recycled at Josephine Moore’s home in Kermit, West Virginia.

To that question Jo posed 20 years ago, what happened to her after welfare reform? Did she sink or did she swim?

The short answer is she and her family are treading water.

Neither Jo, nor any of her six children, has returned to cash welfare since reform took effect. She did get a job: in fact, quite a few over the years. From customer service call centers for American Express and Boost Mobile, to a ham-processing plant in neighboring Kentucky and a Tyson’s chicken plant in North Carolina.

“Nothing smells like that chicken skin stuff that they peel off, and when that stuff gets peeled off, oh — Oh lord — turn your stomach. But then you get down there and see what’s going on you realize it ain’t that bad. And then you learn to breath through your mouth, and it’s not bad at all,” Jo said, laughing. Despite the graveyard hours that kept her and some of her children sleeping in shifts, in a one-bedroom trailer far from home, she maintains it’s the best job she ever had.

In some ways, Jo’s transition from welfare to work is indicative of what happened for many women living close to the poverty line. The rate of employment for single mothers spiked. But if you drill down on those statistics, they get a little more complicated.

For one, the economy in the mid-to-late 1990s was doing better overall. There were more jobs available. Second, the jobs that many single mothers found were low- paying. Wages have been stagnating since then. So welfare-to-work worked for a time, but not as an engine of economic mobility.

Across the country, welfare rolls have dropped. Many fewer people receive welfare checks. A lot of would-be or former welfare recipients like Jo either have low-paying jobs, and are still hovering just above poverty, or have fallen out of the work force altogether. They don’t have cash welfare, and they don’t have regular income from a job.

To gain access to cash, some will go to extreme lengths. For example, selling blood plasma. In the last 20 years, following welfare reform and accelerating after the financial crisis, the U.S. has become known as the OPEC of plasma.

“They stick a needle in your arm, which, I have a scar like right here from where they used to do it,” said Jo’s daughter Estella. She pointed out a tiny hollowing on the inside of her elbow, right near the vein. “Take about an hour and a half, and then they would give you $20 for your first visit for the week, $30 for your second visit for the week, then you could do it weekly.”

Jo and her daughters said they are not afraid to work, to the point of selling their own blood. But, like other working mothers, those low-wage jobs haven’t translated into a step up the economic ladder.

For more of Josephine Moore’s story, and a portrait of another woman at a critical moment in welfare’s history, listen to The Uncertain Hour, a new podcast from Marketplace’s Wealth and Poverty desk. Available via iTunes and other major podcasting apps.