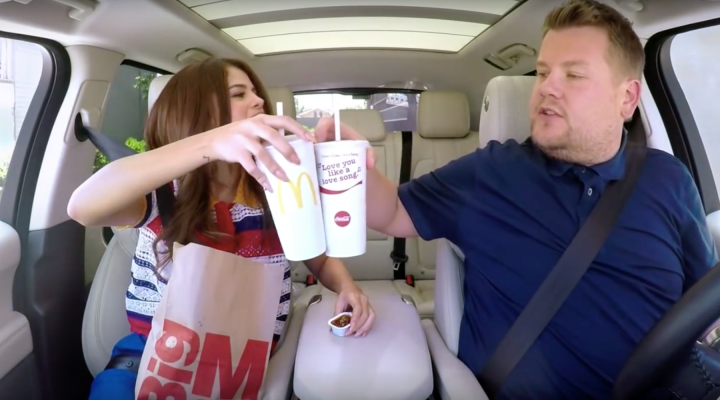 COPY
Selena Gomez and James Corden at a McDonald's drive thru during the Carpool Karaoke segment.  Late Late Show/CBS

Selena Gomez and James Corden at a McDonald's drive thru during the Carpool Karaoke segment.  Late Late Show/CBS
Listen Now

Actor James Corden took over hosting the “Late Late Show” on CBS last year and he’s endeared himself to his fans. One of the things that has fueled his success — his Carpool Karaoke sessions.

If you haven’t seen them, Corden basically hops in a car, picks up his favorite musical celebrity, and the two go for a short drive together. They chat, they laugh, and then … they sing along to that artist’s greatest hits.

The Carpool Karaoke videos have racked up tens of millions of views on YouTube. It was only a matter of time before sponsors came along for the ride, and this week McDonald’s and Coke jumped in the car.

In the latest Carpool Karaoke James Corden hits the road with singer Selena Gomez. Part way through their ride they pull up to a McDonalds drive-thru. Corden orders at the window and then turns to Gomez to ask what she wants. He tells the server, “A number seven, but with a medium fries and a medium Coke.”

And that was only the beginning. McDonald is featured for about four minutes. The video has had over ten million views in less than two days.

“In a way it’s sort of back to the future,” said Dade Hayes, editor of Broadcasting and Cable Magazine.

He added that if you think of late night TV’s roots, “You had the early hosts, Jack Paar — I mean certainly in the early days of television they’d do long segments extolling the virtue of a sponsor.”

Today it’s more subtle. Rebecca Paller of the Paley Center for Media said that the McDonald’s stop in the video seemed natural.

Which is exactly what advertisers are banking on.

“It’s just the tip of the iceberg,” said Shama Hyder who runs the Marketing Zen Group. “I think we’ll see this happening a lot more,” she said, “because brands are realizing that this is new advertising and it’s taking advantage of influencers, and going to meet the people where they are.”

And where younger viewers are, is on YouTube. She said it’s just a question of companies finding the right person or celebrity their audience can relate to. 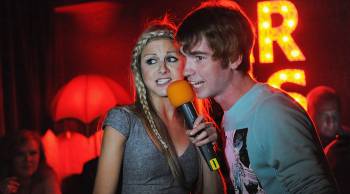 Karaoke with co-workers doesn’t have to be embarrassing