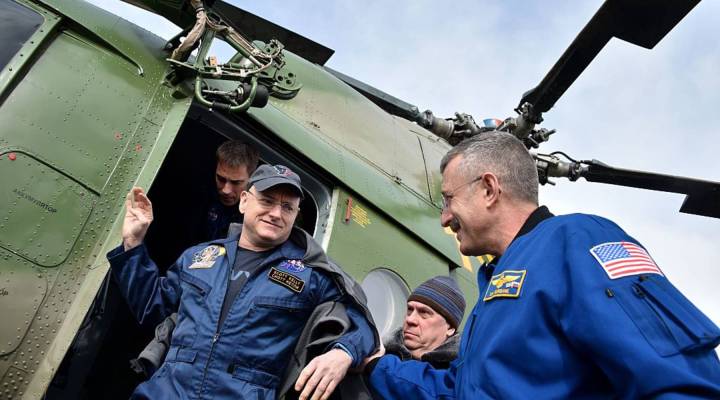 COPY
Members of NASA support team help International Space Station (ISS) crew member Scott Kelly of the U.S. to get off a helicopter on arrival from the landing site at the airport of the town of Dzhezkazgan, Kazakhstan, on March 2, 2016. KIRILL KUDRYAVTSEV/AFP/Getty Images

Members of NASA support team help International Space Station (ISS) crew member Scott Kelly of the U.S. to get off a helicopter on arrival from the landing site at the airport of the town of Dzhezkazgan, Kazakhstan, on March 2, 2016. KIRILL KUDRYAVTSEV/AFP/Getty Images
Listen Now

NASA astronaut Scott Kelly and his fellow Russian cosmonaut just returned from more than a year in space. They rode back together on the Russian Soyuz capsule, which is pretty much the only ride in town.

“At this point, Russia has a monopoly on transportation,” said John Logsdon, founder of the Space Policy Institute at George Washington University. “So we either go with them…or we don’t go at all.”

Since the United States ended its shuttle program, NASA has bought seats from Russia on its shuttles.

But it’s an interdependent relationship, with Russia relying on the U.S. for ground support from control centers in America, plus supplies and technology that keep the space station running.

NASA has a commercial program where private companies will shuttle astronauts to the space station in a year or two. That should — eventually — make the trip a lot cheaper.