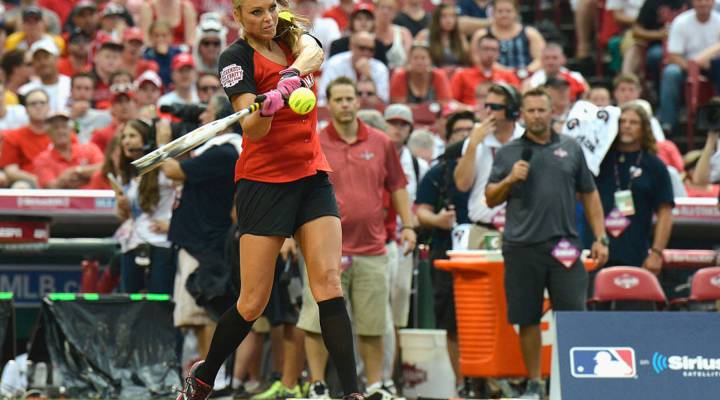 For a lot of people, summertime means being outdoors, playing sports, joining leagues and playing competitively. But for a lot of women, the options are scarce. Softball, especially fast-pitch softball, is considered mostly a women’s game in the 21st century – but that wasn’t always the case.

Softball became hugely popular in the 1940s and 1950s, when professional company-sponsored women’s teams toured the country and played competitively.

Although there was no league, company sponsored teams allowed women access to employment and travel opportunities that would have not been available.

Erica Westly writes about this in her book, Fastpitch: The Untold History of Softball and the Women Who Made the Game.

Westly on the origins of women’s softball teams:

Softball was very much an amateur sport in that time, and all the teams were sponsored by local companies, local businesses. And there were hundreds of thousands of these teams across the country so softball was really crucial for female athletes at the time, it was a crucial opportunity for them to play sports competitively. A lot of these women, their day jobs were as secretaries for the companies. The Jack’s Brewery in New Orleans was one of the best opens to work for and they brought in women from all over the country to play for the softball team and most of them worked as secretaries for the brewery. So that was their full-time job and then on the side they were playing for these really competitive softball teams.

On the state of women’s sports today:

Today, because of Title IX, young women have the chance to play competitive sports at schools which they had basically no opportunity to do in the 1930’s and 40’s, whereas in the 1930’s and 40’s and on until Title IX was passed in the early 70’s, you had women playing for these adult teams and able to have careers into their 30’s, so it’s flipped to a degree where a lot of the young women end up leaving the sport after college because there are so few opportunities after that.

Her thoughts on softball’s elimination from the Olympics:

It was voted off, which was really an unprecedented occurrence, in 2005. No Olympic sport had been eliminated from the Olympic program up to that point, at least not since the 1930’s when the Olympics were kind of still getting formed. It was a big hit, especially internationally. In the US the college game has continued to grow almost exponentially but, internationally it was a big hit for the sport. And it’s a big hit for the college players too because a lot of the young women having watched Jennie Finch and the others compete in the Olympics, they had kind of grown up dreaming of that goal, and then to have it taken away once they were teenagers was really hard for them.