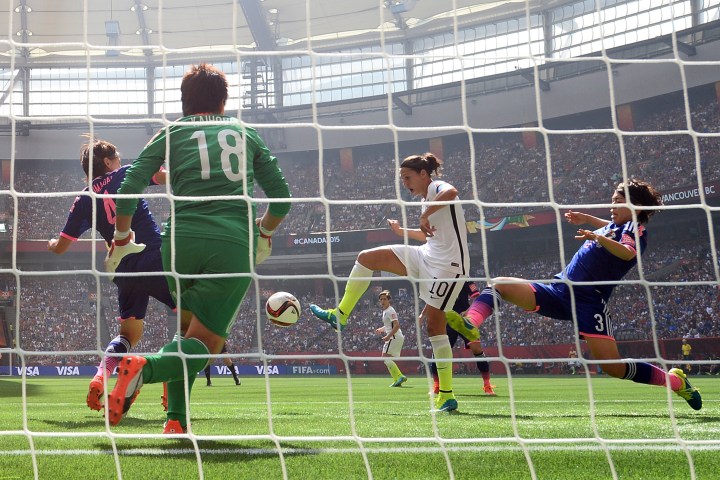 Among those who will be watching the Women’s World Cup when it gets underway Friday is Breland Mungia, 16, of Austin, Texas. She plays a lot of soccer for a club and her high school.

“It takes up a lot of time, but I think it’s totally worth it,” she said after playing in a scrimmage game one recent afternoon.

“I love the women’s soccer more than I do the men’s,” he said. “I think they’re a better product.” He said that’s because the U.S. women’s national team wins. The U.S. side will be trying to win its fourth World Cup title since the tournament started in 1991.

Businesses like winners, too. And more of them want to attach themselves to women’s soccer. Among this year’s biggest sponsors are Coca-Cola, Visa and Adidas. Nike designed custom-made uniforms for 14 of the 24 World Cup teams.

Corporate sponsors are keen to get in on the action, said Caitlin Murray, who covers soccer for Yahoo Sports and wrote the book “The National Team: The Inside Story of the Women Who Changed Soccer.”

“Women’s soccer is becoming popular. People want to watch it, and there’s a reason that now more money is being thrown into women’s soccer,” she said.

Twenty-five million Americans watched the last women’s final, and many sponsors are betting this year’s tournament will be even more popular.

As popular as this tournament is getting, there’s still a lot more money in the men’s game. The overall prize money for the women’s tournament has doubled to $30 million. But for the men’s World Cup in Russia last year, $400 million was on the table.

And right now, money is a big issue for the U.S. women’s national team. A couple of months ago, it filed a gender discrimination lawsuit against U.S. Soccer over pay equity and working conditions.

“The women play more games and they bring in more attendance, so they’re going to make an argument that it’s not equal work for equal pay, it’s actually the women’s teams are doing more work,” Murray said.

Teen soccer player Mungia said she and her friends are aware of the equity issues in U.S. women’s soccer.

“We don’t talk about it much, but we do know what’s happening because I look up to those players,” she said.

Mungia wants to play college soccer and said she hopes pay equity issues are a thing of the past by the time she gets there.