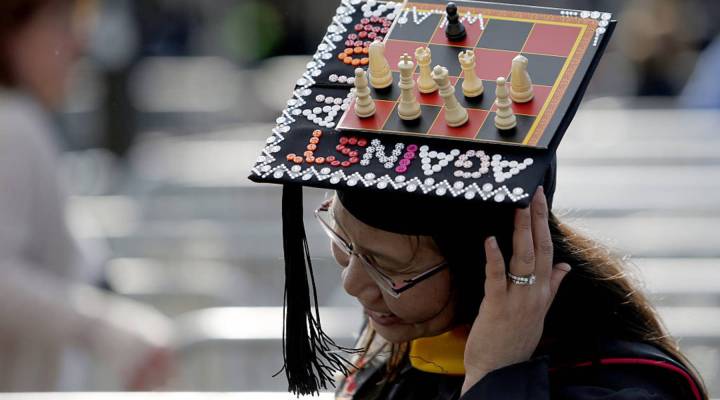 A student at Rutgers University shows her cap as she arrives to attend the 250th anniversary commencement ceremony on May 15, 2016 in New Brunswick, New Jersey.  Eduardo Munoz Alvarez/Getty Images

A student at Rutgers University shows her cap as she arrives to attend the 250th anniversary commencement ceremony on May 15, 2016 in New Brunswick, New Jersey.  Eduardo Munoz Alvarez/Getty Images

Millennials may be living with their parents more than ever, but at least they’re working.

Six months after graduation, about half of the class of 2015 had traditional full-time jobs, according to a new report from the National Association of Colleges and Employers. Another 18 percent were back in school, and 10 percent were self-employed, in part-time jobs or working some other way. The survey looked at half a million graduates from 279 schools, Inside Higher Ed reported. This is an overall improvement from 2014, but breaking the numbers down by major shows a lot of variation.

STEM fields and business saw higher overall employment than liberal arts — no surprise there — but that employment is changing. For example, computer science grads still had the highest full-time employment rate at 72 percent, and they made the most money. But traditional employment is actually down from 2014, as more grads are starting their own business or finding other types of work.

Also surprising: 2015 engineering grads are actually doing worse than they did in 2014, both in employment and pay. Meanwhile, people with humanities degrees are doing better. It’s all relative though: Philosophy grads still trailed in employment, and theology majors pulled in the worst salary.

In general, the study found the more education you have, the greater chance of finding traditional, full-time work. The employment rate for associate degree holders was less than a third, whereas masters degree holders were 71 percent had standard jobs six months after graduating. The number drops slightly for doctoral grads, but a sizable portion of them found non-traditional employment.

Overall, the study shows some subtle but important changes, and goes a long way toward removing the stigma around getting a four-year degree that cropped up during the recession. A couple things the study doesn’t address though: how well college actually prepares those new workers, and all the students who enrolled during the recession and never graduated.