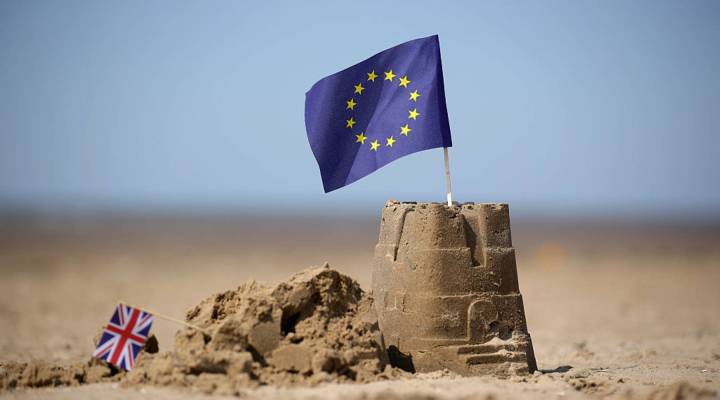 COPY
The United Kingdom will hold a referendum on June 23, 2016 to decide whether or not to remain a member of the European Union. Christopher Furlong/Getty Images
Brexit

The United Kingdom will hold a referendum on June 23, 2016 to decide whether or not to remain a member of the European Union. Christopher Furlong/Getty Images
Listen Now

London has snatched back the crown of the world’s top financial center from its old rival New York.  London is now – according to the influential Z/Yen Group survey – the biggest, the best and the most competitive place on the planet to conduct financial business.  But could London soon be deposed from its pre-eminent position?  If the Brits vote to leave the European Union in their referendum on June 23, could London be toppled from the top financial spot?

Christine Lagarde, the head of the International Monetary Fund, thinks so.

“London’s status as a financial center could be fatally undermined. The whole economy could suffer. It’s going to be pretty bad … perhaps  very, very bad,” she told the British people on a visit to the country last month.

Also anxious about the impact of a British exit, or Brexit, is the boss of the Lloyd’s insurance market, a pillar of London’s financial center for more than 300 years. Lloyd’s CEO Inga Beale said Britain’s departure from the EU would pose a fundamental threat to her business.

“At the moment, we operate freely throughout the 28-nation bloc. Brexit would make matters much more difficult.  We would have to negotiate new trade deals individually with each country.  It would be very costly,” Beale said.

Bankers worry, too. Jamie Dimon of JP Morgan says he may cut 4,000 British jobs if there is Brexit.  HSBC and Goldman Sachs have also expressed alarm that Britain might be cutting itself off from its European markets.

So could London lose its crown as Europe’s financial capital?

Far from suffering as a result of leaving the EU, he claims, London’s pre-eminence would benefit because it is now actually threatened by Britain’s membership due to ever-encroaching EU regulation.

Even some anti-Brexit U.K.-based financiers also do not buy the doomsday scenario of what might happen if Britain leaves.

“I don’t think we would be shut out of continental markets,” said Tarun Jotwani of the TKG private investment group. “London is far too important.”

Jotwani said his company would not pull out of London, although it might have to set up a subsidiary in mainland Europe.

“But I strongly oppose Brexit because it will cause disruption and that can create unintended consequences. That’s what we’re afraid of,” he said.