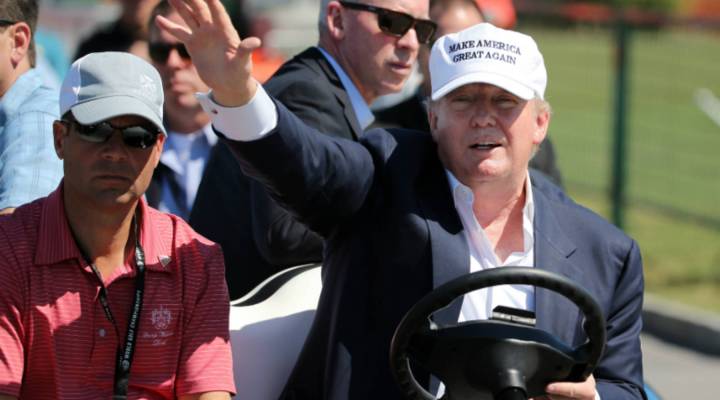 The PGA Tour said it is relocating an elite golf tournament from Donald Trump’s course in Miami to one in Mexico City. The organization said the move has to do with money, not politics.

The PGA Tour’s World Golf Championships event had been sponsored by Cadillac since 2011. But Cadillac did not renew its sponsorship, and PGA Tour Commissioner Tim Finchem said the organization could not procure a sponsor at the Trump National Doral Resort in Miami for next year or for several years out.

Finchem said the move was not about politics, but did acknowledge that the Trump brand could be getting in the way of sponsorships.

“Donald Trump is a brand — a big brand,” Finchem said during a press conference Wednesday. “And when you’re asking a company to invest millions of dollars in branding a tournament and they’re going to share that brand with the host, it’s a difficult conversation.”

The new sponsor is Grupo Salinas, a collection of companies based in Mexico City. The golf tournament will be renamed the World Golf Championships-Mexico Championship starting next year.

Finchem said Trump, the presumptive Republican presidential nominee, had been a “most gracious host.” However, last year, the tour indicated that some of Trump’s campaign statements “were inconsistent with our strong commitment to an inclusive and welcoming environment in the game of golf.”

On a Fox News program, Trump told host Sean Hannity that if the PGA Tour is going to take its tournament to Mexico City, he hopes they have “kidnapping insurance.”