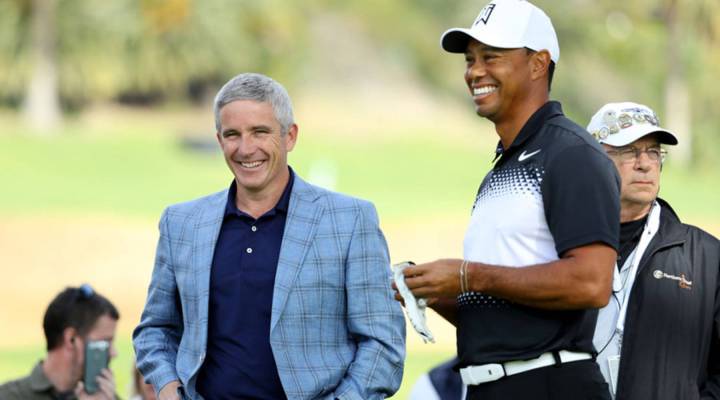 Jay Monahan took over as the PGA Tour commissioner in 2017 after spending a couple of years working closely with his predecessor. He talks to Marketplace host Kai Ryssdal about his plans to grow the fan base for golf, and why social media and a big play for the month of August, have to do with it. What follows is an edited transcript of their conversation.

Kai Ryssdal: A little bit of nomenclature here right. You run the PGA Tour which is not the PGA, the Professional Golfers Association.

Jay Monahan: Correct. We were actually one and the same, the same organization up until 1968 and then separated but we are two separate organizations, but we work very closely together.

Ryssdal: You’ve followed a guy, Tim Finchem, who had this job for it’s 22 years, right?

Ryssdal: And you’ve been on the job for a couple of years. What’s it like trying to take over an organization that’s been run by one guy for 22 years, which is tradition-bound in a lot of ways, and yet now you find yourself in a news media and sports environment that is changing almost faster than you can turn around?

Monahan: I guess to the first part of your question— Tim did an incredible job leading the PGA Tour for the 22 years he was the leader. And the last two and a half years of his tenure, I worked closely alongside him as deputy commissioner. During that time frame, you’re seeing a massive amount of change and disruption in the media and technology landscape, and that obviously affects what we’re doing. Five years ago when you came to a PGA Tour tournament, we didn’t allow you to bring your cell phone on site. And we’ve tried to eliminate a lot of those friction points to take advantage of the social currency that you see from our fans week in and week out. And we’ve also innovated around formats and schedule. We have big events March to July, and that our FedEx Cup playoffs will move to August and will precede the end of college football and the NFL.

Ryssdal: I’m a casual golf fan. No, it’s not ever going to happen. I played a couple of par threes and I’m just, I’m just not good. But anyway, so I like to watch on television. But only under one condition. Well, two actually. One is Sunday, of a big tournament, and really only if like Rory McIlroy or Tiger or so like maybe Phil Mickelson is in the final two pairings. You know, what do you do about people like me?

Monahan: One of the things that we’re seeing over the last several years is there’s such depth to our membership. You look right now and you could argue there are 30 to 35 big names. It’s creating a lot of what we call competitive friction. So when I go to bed, you go to bed on Saturday night, there’s a decent chance a player that you are attached to or that you follow is going to have an opportunity to win. And really it’s making certain that we are telling that story to as broad an audience as possible so that when that opportunity presents itself you’re aggregating the largest audience that you possibly can. And obviously the re-emergence of Tiger, Phil’s win at Mexico City. And obviously Sergio.

Ryssdal: Well all right, well except for Sergio cratering at the Masters, but I guess that’s a whole different deal right?

Monahan: It’s a hard game at any given point in time.

Ryssdal: Spitball it for me though. If you have this job for 20 years, 22 years like Tim Finchem did, what does the PGA Tour look like when you step down?

Monahan: I think you’re going to see great growth internationally. And I just think in a day and age in a world where it seems at times that things will be getting less and less personal, a sport that is so multigenerational, I think, it’s in a great position to compete for mindshare, to compete from a participation standpoint and I just think you’re going to see it continue to grow.

Ryssdal: Well let me ask you about that though because it sounds like you like things the way they are, and yes, CEOs have to say that their enterprise needs to grow, but where’s the growth for you?

Monahan: The growth for the PGA Tour is— you know, you look at our business model. The primary revenue streams are sponsorship and we’re continuing to make certain that we are creating the right value equation for them. And I think longer term there are opportunities to develop more direct relationships with consumers. We’ve had great success with PGA Tour superstores and our partnership with Arthur Blank. You’re going to see us continue to bring our brand forward in ways that directly reach consumer and we think can help grow the game.