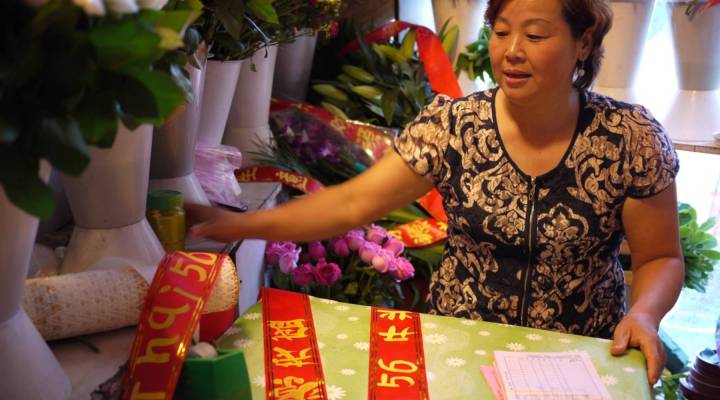 Zhao Shiling arranges flowers in her tiny shop along the Street of Eternal Happiness in Shanghai. 25 years ago, she left her village to work at a factory in Shanghai, and now she runs her own shop, earning money for her sons. Her abusive husband, though, has lost his job and has recently come to Shanghai. Rob Schmitz/Marketplace
Listen Now

SHANGHAI – At Zhao Shiling’s tiny flower shop on the Street of Eternal Happiness, there’s an unhappy customer. “Why aren’t there price tags on any of the flowers?” a man dressed in a nice suit complains, poking at shelves of Zhao’s Technicolor wares.

Zhao calms him with a smile, bargains a little, and makes another sale. She’s used to dealing with angry men. “My father had five daughters, and he hated us. Girls never had status in our family. When guests came for meals, we weren’t allowed to eat at the table. I’m used to it.”

Zhao grew up in the countryside near the birthplace of Confucius in Shandong Province. The philosophy of the “Great Sage” was one of hierarchical social order, and it came to define ancient Chinese society. These rules of behavior are still embedded in Chinese culture today. At their core is the belief in a rigid social hierarchy where the status of women is below men. Among their most important roles, according to Confucius: obedience and giving birth to a son.

Zhao gave birth to two sons. But obedience didn’t come naturally to her. “My father once told me Confucius didn’t like women,” she says, chuckling. “So I asked him: ‘Then why did he marry a woman?’ He didn’t think that was funny.”

When Zhao was a girl, she suffered from Leukemia. Her parents reacted by purchasing a coffin. She survived, her parents sold the coffin, but everyone in her village knew about her illness, and her parents had a difficult time finding a husband. They settled on a coal miner from the nearby mountains. “After we married, whenever I did something wrong, he beat me and he’d break things,” Zhao remembers. “After I had my sons, I left for Shanghai. My sisters still praise me for that. They say every woman in our hometown is unhappy, but I was brave enough to escape.”

It was the early 1990s, and hundreds of millions of migrants – many of them women – were inspired by a month-long train ride that leader Deng Xiaoping took through Southern China. The elderly leader told his countrymen to go out to the factory towns of China to make money. He repeated the phrase “Gaige Kaifeng,” reform China’s economy and open itself up to the outside world.

Zhao moved to China’s most cosmopolitan city to work in a factory, earning enough to start her own flower shop. She brought her sons to Shanghai, saving enough to buy both of them apartments in Zaozhuang, a city of millions near her hometown. “When my boys were young, they thought I was a bad mother because I left home,” Zhao says. “But I began sending them money from Shanghai, and they slowly changed their minds. Now my eldest son tells me: ‘Mom, dad doesn’t deserve you.’”

Last year, Zhao’s husband was laid off at the coalmine, joining millions of men who have lost their jobs due to China’s slowdown, and he showed up on her Shanghai doorstep. Zhao didn’t allow him to live with her. Instead, she helped him find a job at a hot pot restaurant, where he bunks in a dorm with workers half his age, earning a fraction of what she earns. “He doesn’t dare beat me now,” she says. “I’ve earned my independence. I support our sons with my savings. He can’t even support his own family anymore.”

Zhao says he’s not much use around the flower shop, either. “The customers leave once they see him,” she complains. “He doesn’t know how to wrap flowers, arrange them, nothing. He can’t even handle phone orders when I’m away. He tells customers to call my cell. He’s worthless.”

Zhao is working up the courage to file for divorce, but she’s scared of how her family back home will react. Divorce is still rare in her hometown. But that’s not all she’s afraid of. “He’s told me ‘If I can’t have you alive, I’ll have you dead.’ This comment just shows how stupid and backwards the thinking is in my hometown,” Zhao says. “I’m scared he’ll try and kill me. In my hometown, men have beaten their wives to death for things like this.”

In his song “Dad, I’m Back,” Rapper Jay Chou sings “I hear peace comes after war – but why does my dad continue to beat my mom?” The song about domestic abuse has long been popular in China, where more and more young Chinese are demanding change. Five months ago, it came: for the first time in modern history, China made domestic abuse a crime. But on the street of eternal happiness, Zhao Shiling is still too scared to divorce. “I’m afraid I’ll die with everlasting regret that I never truly loved anyone,” Zhao says through tears. “This marriage has caused me so much pain.”

“If I only had two pair of wings,” sings Jay Chou in his famous song, “I would quietly take my mother away from here.”

Zhao Shiling uses the Chinese phrase “Si bu ming mu” when she talks about staying married to her husband. It means her eyes will remain open when she dies, a symbol of regret in Chinese culture. But lately, when I’ve visited her, Zhao seems stronger, and she seems closer to making that difficult decision.

Her biggest hope, she tells me, is to die with her eyes closed.