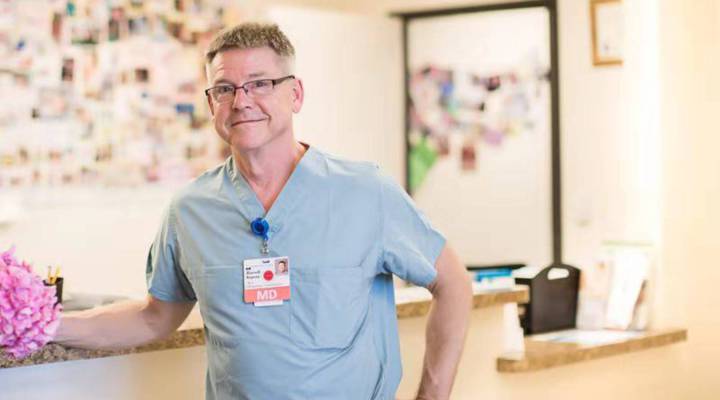 As part of a series on “birth tourism”, Marketplace’s China correspondent Jennifer Pak explores why Chinese parents come to America to give birth. You can read an overview of the journey parents take, learn how they make the decision to have a child in the U.S., and meet agencies that make the arrangements for families.

Every year, thousands of babies are born in the U.S. to mothers from China, according to estimates by experts. The phenomenon is referred to as “birth tourism.” Parents-to-be do this to obtain American citizenship for their babies. They spend tens of thousands of dollars to hire agencies that help arrange their trips to the U.S.

America’s healthcare system is a big draw. Many people in China do not trust their domestic medical system, which is underfunded and overburdened. Under-the-table payments to doctors — in the form of “hongbao”, or lucky money, exchanged during the Lunar New Year — is a way to skip long patient queues or ensure patients are treated well.

Suzhou City’s Harper Hsuan said the experience of delivering her second baby in Los Angeles last year was far superior to her first child’s birth in China. “After I entered the delivery room, no one checked on me until I was ready to give birth,” Hsuan said of her first pregnancy. She added that the hospital was considered a good one in China.

“Then, right afterwards, the doctor and nurses left for another patient,” she said. “It took a long time until someone came to stitch up my wound.”

Birth tourism agencies also tout that epidural painkillers are widely available in the U.S., unlike in China. “It is already difficult to live as a woman. Why suffer this pain?” reads a marketing brochure by Gedao Life Agency.

Marketplace spoke to two caregivers at a clinic in California that treats mostly Chinese patients. Dr. Russell Rapoza of Fountain Valley, California, has been delivering babies for more than two decades. His medical assistant Chloe Zhao was an obstetrician in China before coming to the U.S. Their answers are edited for grammar, style and brevity.

When did your clinic start taking patients from China?

Rapoza: I started seeing Chinese patients around five years ago. I just ran into [a birth tourism agent] who saw that I was a doctor working at the [Fountain Valley Regional Hospital] at the time who said, “Can I bring patients to you?”

I said, “Okay.” One by one, patients came in and [then] they told others. We figured out a way to interpret their prenatal care [files written in Chinese]. Now, 60 to 70 percent of my patients are from China.

Zhao: Most of the clients know about us through word-of-mouth and advertisements on [the Chinese Twitter-style platform] Weibo. Half of our patients are referred to us by agencies.

How many babies born to Chinese nationals have you delivered?

Zhao: Over the past year we’ve had about 30 patients from China a month. [Dr. Rapoza is among] seven or eight doctors in Orange County [who accept Chinese patients]. Some American Chinese doctors have 70 to 80 pregnant mothers from China per month. All of them are listed on China’s birth tourism agencies’ websites and patients are free to choose who to see.

Why do patients from China have so few American doctors to choose from?

Zhao: By the time Chinese pregnant moms arrive in the U.S., they are due in less than 10 weeks. Many of the Chinese patients do not speak English. Their medical history is written in Chinese. Most American doctors don’t accept these patients [so far along in their pregnancy], because of the communication problem, and difficulty in understanding their medical files.

What is your clinic’s selling point?

Zhao: Our advantage is obvious. First, Dr. Rapoza graduated from a well-known medical school at Georgetown University, and he is white, which is seen as prestigious among Chinese nationals. Plus, I was an obstetrician in China for 10 years prior to this job, and as Dr. Rapoza’s medical assistant I can communicate with the clients well. I am answering patients’ questions, 24/7, over [the popular chat app] WeChat.

Who are your patients?

Zhao: In the past, our patients were mainly from the major cities: Shanghai, Beijing, Guangzhou and Shenzhen. Now, we are also seeing patients from poorer provinces like Hubei, Hunan, Guangxi and Jiangsu. Some of them have their own businesses, others work in government departments in China.

Why do your patients want to give birth in the U.S.?

(Marketplace note: The wide availability of epidural painkillers in U.S. hospitals has been marketed to Chinese families as “painless labor.”)

What has been the trend in this industry?

Zhao: In the past, people thought [giving birth in the U.S.] was a privilege only enjoyed by rich people, but now there are more middle-class families coming. The whole trip to the U.S. is not as expensive as before, and I’m starting to see more do-it-yourself patients [as opposed to those who arrange their trips through agencies]. These patients rent their own apartments, apply for visas, rent cars, hire maternity caregivers, all by themselves. The cost is around $20,000 to $30,000, including medical costs, which is affordable, now, to more people in the middle class.

(Marketplace note: The federal government does not track these numbers, but those in the industry estimate the number is in the thousands.)

Do you know if your patients come legally to the U.S.?

Zhao: Yes. Most DIY clients [who don’t use agencies] will contact me first [from China]. I’ll give them a doctor’s appointment slip that they can show to U.S. immigration to prove that the patient is coming to give birth and has already booked a doctor and hospital. Then [once they receive the U.S. visa] they can rent a room near the hospital.

(Marketplace note: A U.S. consulate spokesperson in Shanghai said in a statement to Marketplace that travel to America for medical purposes – such as giving birth – “does not in and of itself make an applicant ineligible for a tourist visa.”)

Have you had to change your business model for your patients from China?

Rapoza: I started hiring more Chinese-speaking medical assistants. We give talks once a month to groups of [new] patients that are coming to see me. We go through what the experience is like when you come to the United States and deliver a baby. It’s almost like an unlearning process. Many doctors back [in China] will tell them that there is a cord around the neck and there is no way they can deliver [a baby], for example, and that’s just not true.

We’ll [also] talk about things that are different and expectations that they have in China that we don’t really pay heed to, like there’s a magic day or magic time [to deliver a baby]. We make decisions based on the medical information.

(Marketplace note: It is easy to get doctors in China to perform a cesarean section when parents want their baby born at an auspicious time.)

The biggest differences between medical care in China and the U.S.?

Zhao: There are many patients in China, and hospitals are very busy. Prenatal care will take a whole day to queue and do the checkups. But patients don’t have to wait too long in the U.S. because there is an appointment system. An American doctor will follow a woman from the beginning to the end, so they know their patients well, but in China, a patient will see whichever doctor is free that day, and patients will have to repeat their medical history over and over. In China, a doctor will receive 60 to 80 patients per day, but in the U.S., a doctor sees about 10 to 20.

Do Chinese patients pay the same as Americans?

Zhao: The charge is the same to Chinese and American patients. The doctor will charge a patient $3,200 for his whole service, which usually last for two or four months [with check-ups, delivery and aftercare]. Then patients have to pay separate fees to the hospital, because the charges are separate. A two-day stay for natural delivery costs $2,794. A cesarean section will cost $4,400 for the operation, and three-day stay at the hospital. Add an extra $500 for anesthesia service and $200 for pediatrician costs. The fees are not high when you compare them to private hospitals in China.

Since Chinese patients have to pay their bills directly to you, do you prefer this clientele over American patients whose fees are paid by insurance companies?

Rapoza: Certainly. Of course. I don’t think you’re going to find a doctor who goes, “No, I want to wait three months to be paid for what I do.”

Critics of birth tourism say these parents are using America’s resources and their children will be a burden to the welfare system. What’s your view?

Rapoza: Our clients are paying for everything [upfront]. Not only that, but they’re boosting our economy in other ways when they come here and stay [typically for three months]. They’re seeing our tourist sites. They’re shopping at our stores. They’re boosting our economy. I think [the criticism is] complete nonsense. I think it’s only xenophobia, and really without any economic eye to it at all.