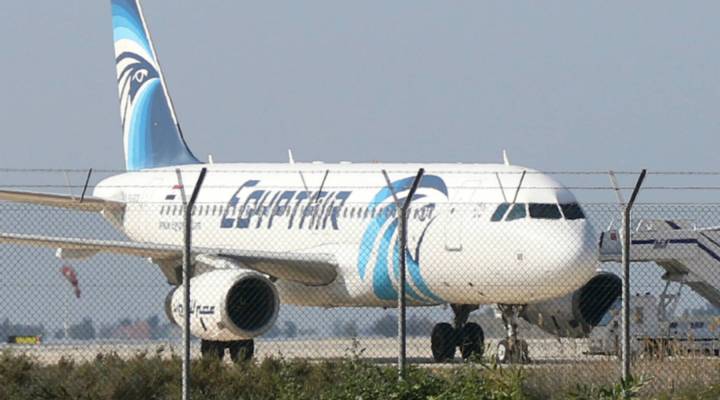 An EgyptAir flight that went missing between Paris and Cairo has crashed, French President Francois Hollande has confirmed.

There were 56 passengers – including three children – seven crew members and three security personnel on board Flight MS804, EgyptAir said.

Mr Hollande said all information confirmed that it had indeed crashed.

A major search and rescue operation is under way in the Mediterranean Sea, involving the Greek and Egyptian armed forces. France has offered to send boats and planes to help in the effort.

Both French and Egyptian officials have refused to be drawn on what brought down the plane, which had 30 Egyptians, 15 French citizens and one Briton among those on board.

Although there is no evidence yet to indicate a malicious attack, the spectre of terrorism inevitably looms over this latest aviation tragedy, says the BBC’s security correspondent Frank Gardner.

It was only seven months ago that a Russian passenger jet was brought down over the Sinai by the IS group, which has vowed to target Egypt and the Westerners who visit it, he notes.

Flight MS804 left Charles de Gaulle airport in Paris at 23:09 local time on Wednesday (21:09 GMT) and was scheduled to arrive in the Egyptian capital soon after 03:15 local time on Thursday.

EgyptAir said the plane had been flying at 11,300m (37,000ft) when it disappeared from radar shortly after entering Egyptian airspace.

Greek aviation officials said its air traffic controllers had spoken to the pilot a few minutes earlier and everything had appeared normal.

One official told AFP news agency the plane had crashed “around 130 nautical miles” off the southern Greek island of Karpathos.

There was some confusion over whether a distress signal had been sent by the plane.

Egypt’s state-run newspaper al-Ahram quoted an EgyptAir statement as saying the Egyptian army’s rescue and search had received a distress call from the plane at 04:26 local time – which would be around two hours after the flight disappeared.

But Egypt’s military subsequently said that no such signal had been received.

If this turns out to be a terrorist attack, then eyes will turn first of all to Charles de Gaulle airport, from where Flight MS804 took off on Wednesday night. Could there have been a breach of security allowing a device to be smuggled on board?

Security at Charles de Gaulle, which was already tight, has been tightened even further since the Paris attacks in January 2015 and last November. There is the visible security, with soldiers on patrol, but more important is what is not seen – the monitoring of passengers and staff.

One weak point identified in recent years has been the large number of flight-side workers who come from high-immigrant areas of the Paris suburbs. Last year there was a security review of the 86,000 workers with authorisation to go flight-side. More than 60 had their authorisation withdrawn because of fears of Islamic radicalisation.

Of course, the investigation will also look at another possibility – that the device, if there was one, was smuggled on elsewhere.

Egyptian Prime Minister Sherif Ismail arrived at Cairo airport, along with families of those on board the flight. He refused to speculate on what had happened, saying “we cannot rule anything out”.

His words were echoed by French Foreign Minister Jean-Marc Ayrault who was at Charles de Gaulle airport where a crisis centre has been opened for relatives.

He described it as a “moment of intense emotion” for the relatives, who are “without any news”.

The presidents of Egypt and France have spoken and are each holding emergency meetings with their top officials, according to reports from both countries.

Flightradar24 listed details of the plane’s journey on Wednesday which showed it had flown from Asmara, in Eritrea, to Cairo, then on to Tunis, in Tunisia, before heading, via Cairo, to Paris.

Aviation analyst Alex Macheras told the BBC that Airbus A320s were regularly used for short-haul budget flights and had “an amazing safety record”.

In March, an EgyptAir plane was hijacked and diverted to Cyprus. The attacker later surrendered and all hostages were released.

Last October, a Russian passenger plane flying from Sharm el-Sheikh crashed over the Sinai peninsula killing all 224 people on board. Officials in Moscow and Egypt later said the aircraft was brought down by an explosive device.

IS said they had bombed the plane.

If anyone is concerned about relatives or friends following the disappearance of the flight, they can call this free number provided by EgyptAir: +202 259 89320.