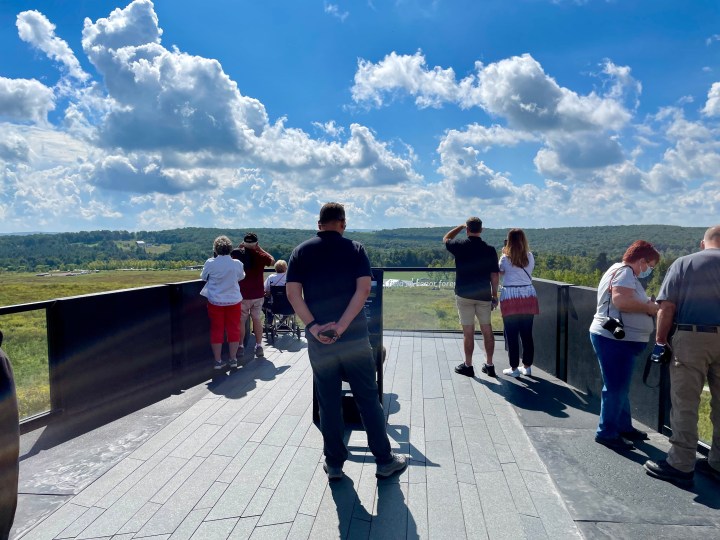 COPY
Visitors look out over the crash site at the Flight 93 National Memorial in Shanksville, Pennsylvania on Sept. 9, 2021. Nova Safo / Marketplace

Visitors look out over the crash site at the Flight 93 National Memorial in Shanksville, Pennsylvania on Sept. 9, 2021. Nova Safo / Marketplace
Listen Now

Shanksville is where the fourth plane – United Flight 93 – crashed. There’s now a national memorial there. And, tens-of-thousands of people are expected to visit this weekend.

Local businesses are bracing for a surge in customers.

The Flight 93 memorial is reachable by narrow roads, deep in rural Western Pennsylvania.

“You have to really want to get here … it literally is off the beaten track,” said Stephen Clark, the National Park Service superintendent in charge of the memorial. He said they’re seeing 420,000 visitors a year, which surpasses expectations, and there’s been a surge of interest leading up to the 20th anniversary weekend.

“We are having unbelievable visitation, our parking lots are full … I would say Friday, Saturday and Sunday, it’s easily going to be in that 20,000 to 30,000 range of visitors,” he said.

The small communities that surround the memorial are used to an annual surge in visitors around 9/11. But Tom Lear, general manager of the Fairfield Inn and Suites in the nearby town of Somerset, said this 20th anniversary year is different. His hotel is fully booked.

“The demand is incredible. And just for this year I know a lot of the local hotels around the surrounding counties are sold out,” he said.

At the same time, Lear, and other businesses here are contending with the same pandemic-era worker shortage as the rest of the nation.

Lear said his staff is stretched thin, and he has not been able to fill several open positions.

“I mean, it didn’t matter what you were paying ‘em. I mean, if you drive up and down the road anywhere, you see signs for everybody needs help,” he said.

With fewer staff than he’d like, Lear said this weekend will be a challenge.

At Castagna’s Restaurant and Lounge, located roadside just a third of a mile from the memorial, owner Karen Carper faces a similar dilemma.

“There’s my meatloaf, looking beautiful,” said Carper, the only cook in her kitchen.

“I have a bartender-waitress. And a lady that’s kind of everybody’s helper. There’s like, there’s three of us.”

So, Carper has employed a clever strategy. She’s temporarily removed complicated dishes from her menu.

“I do it to try to simplify the menu so I can take care of more people. It just helps to be more efficient, gets out of the kitchen faster,” she said.

Businesses here may have to figure out more permanent changes soon, because annual visitor numbers are expected to only increase. Which means more demand on businesses here not just for a weekend – but throughout the year.