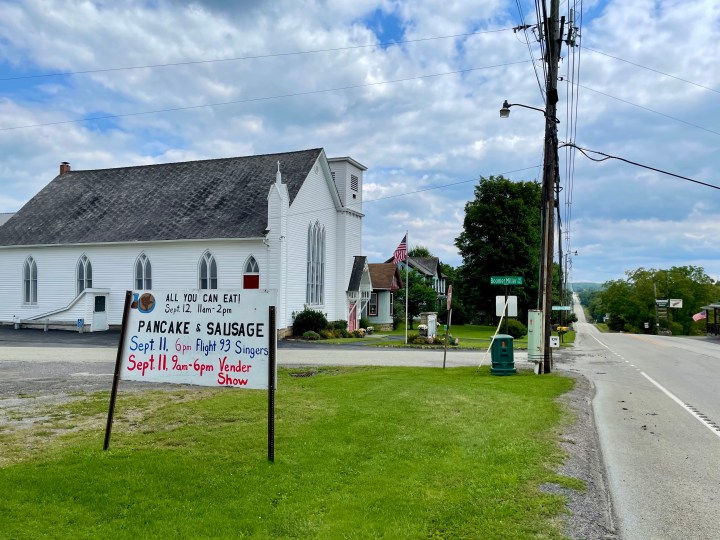 COPY
A church near the Flight 93 National Memorial displays a sign with events scheduled for Sept. 11, 2021. Nova Safo / Marketplace

A church near the Flight 93 National Memorial displays a sign with events scheduled for Sept. 11, 2021. Nova Safo / Marketplace
Listen Now

Thousands are expected at a rural community in Pennsylvania this weekend for the 20th anniversary of the 9/11 attacks. The fourth jet, United Flight 93, crashed in Shanksville. That’s about an hour-and-a-half drive outside of Pittsburgh.

The site of the crash is now a national memorial, as well as a marker of economic impact on the town and the region.

Flight 93 crashed in a field in Shanksville, population: a little over 200.

Jason Snyder was a member of Shanksville’s volunteer fire department at the time.

“There was a big hole in the ground and smoke coming out,” he said.

I met Snyder outside the convenience store he owns in Shanksville, one of only a couple of businesses, on the handful of streets that make up the town’s core.

Snyder said every year around this time, “You just get an influx of people, in the whole week or two weeks before, you know, people coming down …”

That influx has not necessarily meant new business though. Snyder said his store serves mostly locals, and sometimes a few curious tourists.

At the Pine Grill restaurant there, Dylan Zerfoss is taking phone orders. He says the Flight 93 memorial brings in a lot of newcomers.

“Quite often, a lot of patrons asked for directions alone to the monument or they’ll say that they have been there,” he said.

Miller’s restaurant has benefited because of its location in Somerset, the biggest city in the area right off the Pennsylvania turnpike, with a cluster of hotels and restaurants for visitors.

But Ron Aldom, head of the Somerset County Chamber of Commerce, said those benefits have not translated to a significant regional economic boost.

“It hasn’t had that big of an impact on permanent things like you know, more restaurants, more hotels, but it has solidified those that are here,” he said.

One reason for that he said is that Somerset was already a tourist destination, with state parks, ski resorts, and other attractions.

The other reason, Aldom said, is that the Flight 93 memorial is personal for so many here who witnessed the tragedy 20 years ago.

“There’s a sense of nobody wants to exploit it,” with new businesses that take advantage of the memorial’s presence.